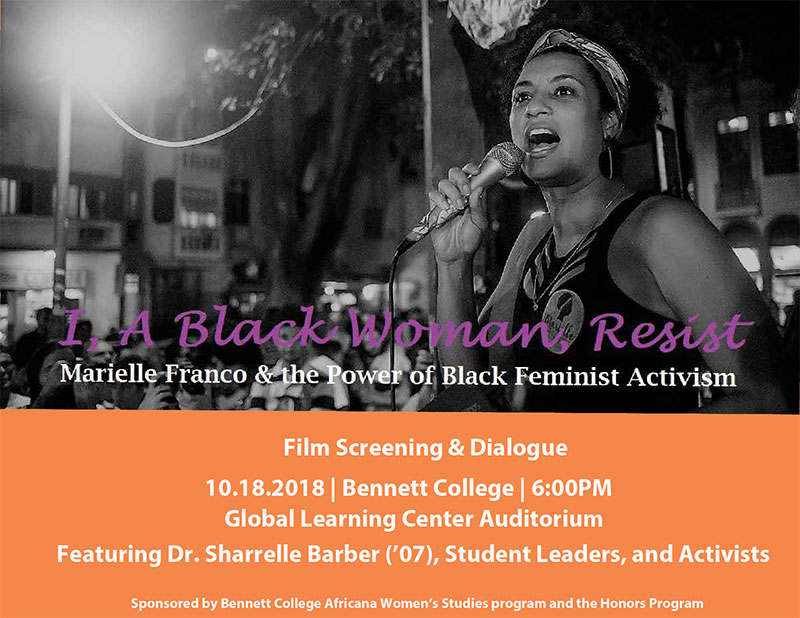 Join us for a pre-screening of I, A Black Woman, Resist, a short documentary film project honoring the life and legacy of Afro-Brazilian activist Marielle Franco. The film will be followed by a panel discussion moderated by Dr. Valerie Johnson, Mott Professor of Africana Women’s Studies at Bennett College and featuring scholar-activist Dr. Sharrelle Barber (’07), student leaders, and local activists. Sponsored by the Bennett College Africana Women’s Studies Program and the Honors Program.

This event is free and open to the public. Light refreshments will be served. CLICK HERE TO REGISTER

About the Short Documentary Film Project

Afro-Brazilian activist and politician Marielle Franco — a champion for racial and gender equity in Brazil and a staunch critic of police brutality and state-sanctioned violence— was assassinated on March 14th, 2018. Earlier on the night of her assassination, Marielle led an event entitled “Young Black Women Moving Power Structures” at Casa Das Pretas. Deeply rooted in the longstanding tradition of Black Feminist activism in Brazil, Marielle dedicated herself to speaking truth to power and to empowering marginalized communities in Brazil— up until the final moments of her life.

Inspired by her activism, this short documentary film project aims to share with US-based audiences Marielle Franco’s legacy and the wave of activism among Black Women in Brazil that has intensified in the wake of her death. Featuring a first-hand account of the event at Casa das Pretas from Sharrelle Barber and interviews with Kia L. Caldwell, Zakiya Carr-Johnson, and Erica L. Williams, this short film seeks to build consciousness and facilitate dialogue around the necessity of transnational solidarity in the fight against racism and the global struggle for Black Lives.