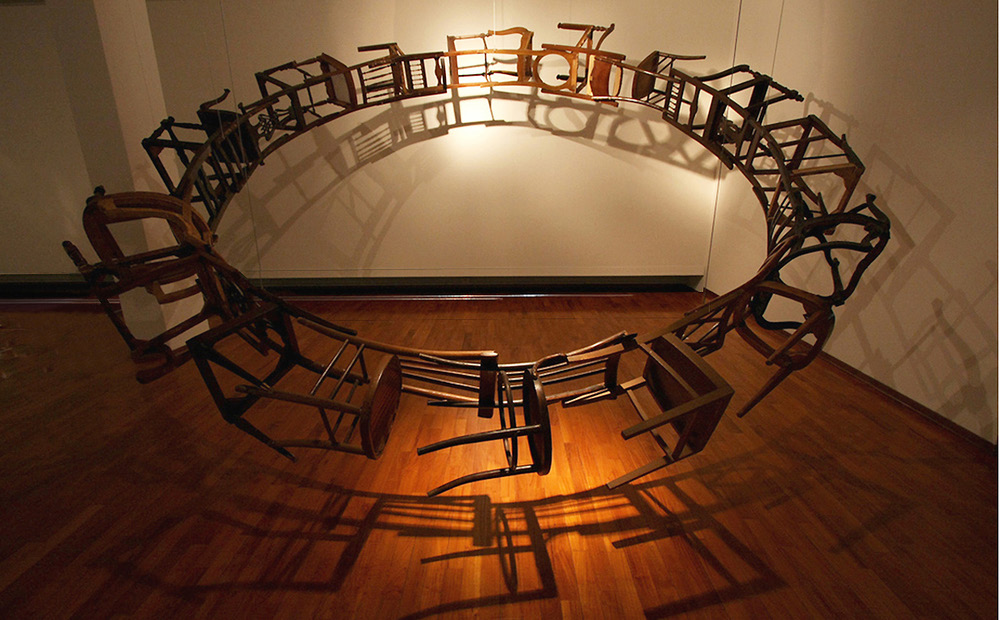 The title of the work, Twice Told, comes from The Souls of Black Folk by writer and civil rights pioneer W.E.B. DuBois. In his 1903 book, DuBois wrote, “One ever feels his two-ness—an American, a Ne- gro; two souls, two thoughts, two unreconciled strivings . . . .” This quote describes DuBois’s theory of “double consciousness,” the duali- ty of the black American psyche in which black men and women must reconcile understanding of self with the perceptions of a racist society.

Through the twinned structure of the work, Robinson both incorporates the theory of double con- sciousness and challenges it. The parallel lines of the sculpture never meet, much as DuBois ar- gues that African-American psyches remain unreconciled. However, the many chair legs that com- pose each line challenge the universality of this theory and suggest the possibility of multiple perspectives. Based on a performance Robinson once did with life-like manicans of African-Amer- ican leaders, Robinson will work with students at Bennett College to identify their own histori- cal heroes and use performance and sculpture to make their ideas more accessible and tangible.

Born in Los Angeles, Robinson earned an MFA from the Maryland Institute Col- lege of Art in 2002. He participated in the Whitney Independent Study Program (2002–03) and was an artist in residence at The Studio Museum in Harlem (2004– 05), the Lower Manhattan Cultural Council (2009) and The Rocktower in Kingston, Jamaica (2008). Robinson has exhibited in the United States and abroad at venues including the New Museum of Contemporary Art in New York, Galleria d’Arte Moderna in Turin, the Centre for Contemporary Arts in Glasgow and Salamatina Gallery in New York. He lives and works in Brooklyn.