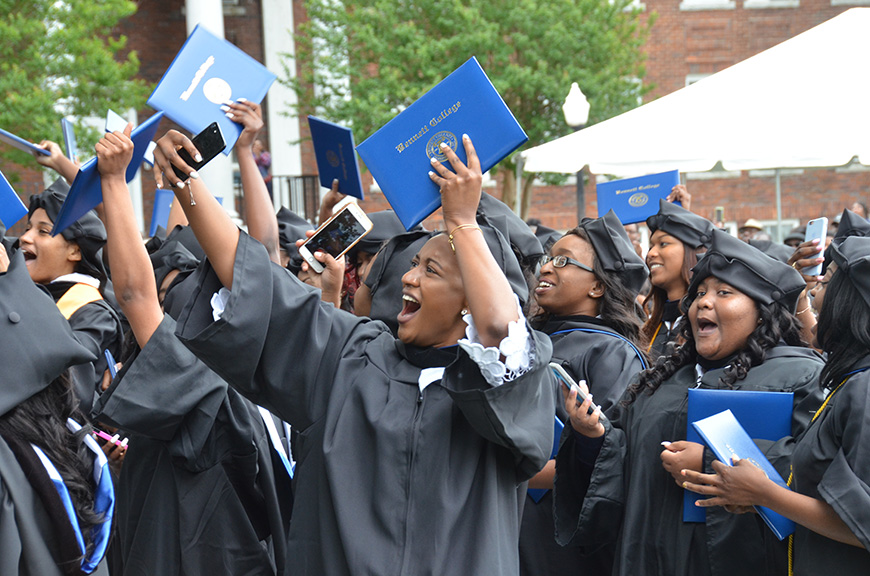 “Bennett College invested in you,” Adams said in a fiery speech that attacked President Trump for failing to adequately fund HBCUs and for jeopardizing the health insurance of as many as 24 million Americans through his efforts to repeal the Affordable Care Act. “You’re the change makers. Don’t apologize for being the strong women you’ve become. You must embrace your responsibility as our nation’s next leaders.”

Adams, a professor at Bennett for more than 40 years, packed a lot into her 21-minute speech. She invoked the names of Bennett trailblazers and told the members of the class of 2017 that they, too, are “phenomenally bold and brilliantly awesome.”

Long a staunch supporter of HBCUs, Adams told nearly 2,000 people assembled on Bennett’s quadrangle that she puts HBCUs at the top of her list. Then she drew laughter by saying, “and that’s not fake news either, and I approve,” both obvious digs at Trump.

But make no mistake about it. The bulk of Adams’ speech had nothing to do with the new White House administration and everything to do with inspiring Bennett’s graduates to continue persevering and working to make the world better.

“Somebody sacrificed and went without so you could be sitting in those seats today,” she said. “My mom did domestic work. She cleaned white folks’ houses so I wouldn’t have to.”

“I went from the ghettos to Congress,” Adams said. “Where you start in life doesn’t have to determine just how far you can go. Graduates, to whom much is given much is required. Each of you sitting here today is on the cusp of finding your way in the world.”

Adams referenced Bennett President Dr. David Dallas Jones, who was known for asking his students, “young lady, what is your purpose?” She praised Dr. Willa B. Player who succeeded Jones and became Bennett’s first female president as well as the first African-American woman to lead a four-year institution. Player allowed Dr. Martin Luther King, Jr. to speak at Bennett in February 1958 when other Greensboro colleges and businesses were afraid to host him.

“Bennett Belles have always been on the front lines,” she said. “As you climb Jacob’s ladder, or Jennifer’s ladder, you gotta reach back and help someone else.”

Commencement exercises lasted just over two hours. Before Adams’ address, graduating seniors Anjuna Holloman and Briana McDuffie read scriptures from the Old and New testaments, respectively. Dr. Gladys A. Robinson, a 1971 Bennett graduate, chairwoman of the school’s Board of Trustees and deputy minority leader in the Senate, brought greetings. So did outgoing SGA President Yahnick Barclay from Bermuda. Barclay is a biology major on a pre-med track who aspires to become a general practitioner.

Also on Saturday, honorary degrees were conferred upon Victor Marshand Webb of California, a retired TV producer and director who is a longtime Bennett supporter, and Dr. Gloria Dean Randle Scott, who served as Bennett’s president from 1987 to 2001. Scott said she was more touched by the honorary degree than any other award she’s received – including those from Indiana University, from which she earned her bachelor’s, master’s and Ph.D. degrees.

On Saturday, Interim President Dr. Phyllis Worthy Dawkins announced that trustees had approved the naming of the Honors Residence Hall after Cole. She also told the audience the institution was launching the $1.5 million campaign to fund the Johnnetta Betsch Cole Scholars, which will help the institution offer more competitive scholarship packages to students.

“For those who say we cannot raise that money for scholarships, for Cole Scholars, let me remind you of words spoken by President Nelson Mandela,” Cole said. “‘It always seems impossible until it is done.’ And it will be done. God didn’t bring Bennett College this far to leave her.”

Janis Bradley of Indianapolis, Indiana, attended Commencement for her granddaughter, Bria Hawkins. As the two hugged after the ceremony, Bradley’s eye filled with tears. “To God be the glory,” Bradley said. “I flew in on Delta Airlines yesterday to be here and wouldn’t have missed this for the world.”

Eleven of Hawkins’ relatives attended the ceremony, including her parents, Damon and Lena Hawkins, and her two brothers. Before leaving campus for a celebratory brunch, the family released several balloons in memory of Hawkins’ three deceased grandparents, Jesse Bradley, Eleanor Jefferson and Robert Conn.

“She’s always been very focused,” Bradley said. “Since sixth grade she knew she wanted to be a teacher, and we’re very proud of her.”

Hawkins, an English major, has a job lined up at a Brooklyn, New York, middle school.

“I believe Bennett has instilled everything in me that I need to succeed in the next chapter of my life,” she said. “Bennett is a small institution, but it’s a wonderful school that provides students with many opportunities, including the chance to study abroad. I’m going to miss Bennett, and I definitely recommend it to high school girls looking for place to attend college.”