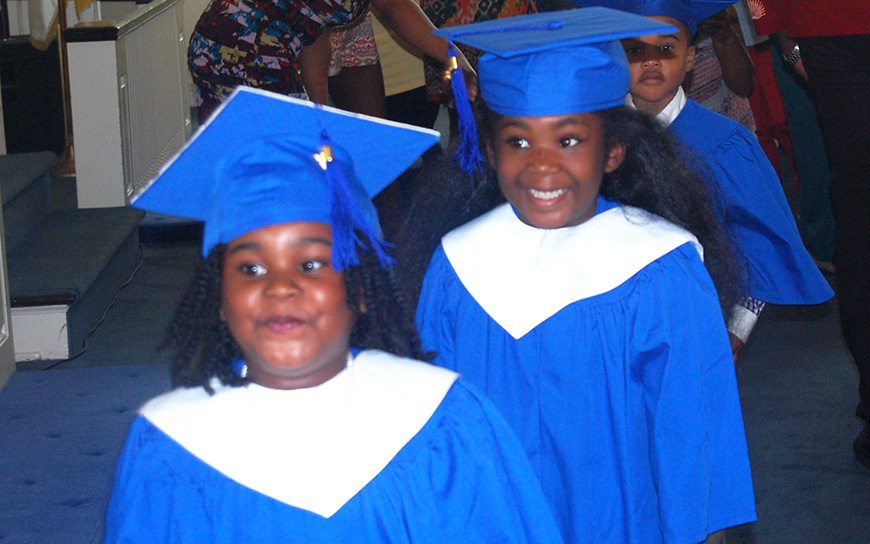 On May 24, the Early/Middle College at Bennett College held its annual commencement, with 23 graduates receiving diplomas. Among the graduates was Jakara Jordan, who completed 1,634 community service hours and was recognized for that accomplishment by Bennett College Interim President Dr. Phyllis Worthy Dawkins during her welcome remarks. Dr. Dawkins also asked the audience to join her in a standing ovation for Early/Middle College Principal Dr. Esther Coble, who is retiring after serving as principal for 11 years. The 23 Early/Middle College graduates have all been accepted into various colleges, and they all will enter their respective institutions with earned college credit.

On May 19, the Martin Dixon Intergenerational Center held its annual Stepping up Ceremony. During the ceremony, the children counted to ten in four different languages – English, Spanish, Ki Swahili and Sign Language. They were taught Ki Swahili by Dr. James Mwangi, a Fulbright Scholar who taught the Bantu language, the first language of the Swahili people, at Bennett during the 2016-2017 academic year. The children also sang a song about an alligator and a monkey during the ceremony that had parents and other relatives brimming with pride. Bernetta Harper, Interim Director of the Martin Dixon Intergenerational Center, presided over the ceremony, and Dr. Dawkins urged everyone in the audience to do what they can to ensure the graduation was the first of many for the children who are ages 4 and 5.