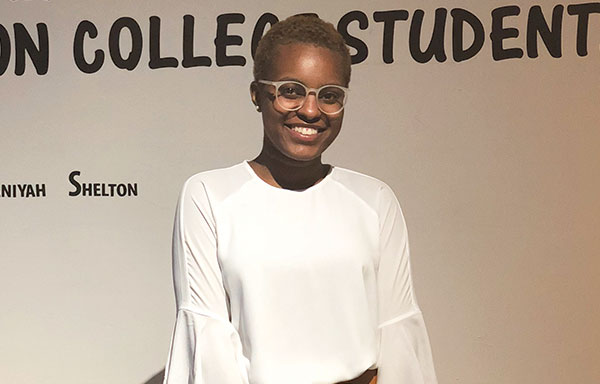 Prior to coming to Bennett College, Janiyah Shelton listed having an art show before she graduated as one of her goals.

Well, the sophomore Journalism and Media Studies major can already check that off her list.

“Janiyah was part of another show we did with Bennett College photo students in the fall,” said Greensboro Project Space Director Adam Carlin. “She approached me afterward and said she was really interested in having a solo exhibit. She had some really good ideas, and she took time to develop the project. She thought of different iterations of it and what that would look like together with what the audience experience would be. She even had something for people to read.

“What I liked about it a lot was her exhibition contained a lot of people and was about the people and their stories,” Carlin continued. “A lot of times when artists have exhibits it’s just about the work, but her exhibit contained the community and that’s just a really powerful thing that artists can do and that’s what she did.”

Shelton became interested in photography in high school and started her own business as a junior. “I wanted to do something in the art field since I played instruments from middle to high school,” she said. “I was really exploring what I wanted to do as a career – something that I would have a passion for forever.”

Her exhibition focused on a subject that has gained national attention again in the wake of the February 14 shooting at Marjory Stoneman Douglas High School in Parkland, Florida, that left 17 people dead and another 17 injured. The alleged shooter is known to have suffered from depression and has been treated for mental illness.  Shelton selected the mental health of college students in hopes of shedding light on a subject that’s all too often glossed over.

“My pictures are arranged by emotion,” Shelton said. “I have a total of five emotions and 20 students, and I gave four students each the same emotion to display. My first emotion starts with joy, and I end with anger. I wanted to make sure it didn’t start on a negative note to affect those who are seeing the show. It was a pretty stressful process juggling school work and preparing for an art show, and I want to thank those who participated in the show and were comfortable enough to share their stories with me.”

Shelton turned down a chance to study abroad this semester because of the art show but doesn’t regret the decision. She’s one of many talented Journalism and Media Studies majors at Bennett College, where biology, social work, business administration, psychology and JMS are the top five majors.

“My experience at the NABJ Convention in New Orleans was wonderful,” Shelton said. “I networked with other college journalism students from around the country, and each day we attended different workshops led by professional journalists from media outlets including Buzz Feed, NBC and CNN.  I even exchanged business cards with an NBC photojournalist who gave me advice on ways to better market my business. He also followed me on Instagram at the end of the networking session.”

Shelton was happy for colleagues Azuree Bateman of Charlotte and Dasja Sanford of Dayton, Ohio, who during the convention interviewed actor Shemar Moore and producer Jon Landau. Moore previously starred in the hit CBS shows “Criminal Minds” and “The Young and the Restless,” and Landau is known for producing blockbusters including “The Titanic,” which won him an Academy Award and earned $2.19 billion in gross revenues, and “Avatar.”

“If our JMS professors didn’t adequately prepare us, I don’t think I would have had the insight to exchange business cards with a professional photojournalist,” Shelton said. “I also don’t think Azuree or Dasja would have been able to hold their own in the interviews with such famous people. I’m grateful for the outstanding and caring professors we have in JMS.”

Lipscomb said he enjoys working with Bennett’s JMS students and preparing them for the workforce.

“The professors in JMS try to let the students understand that their success after college depends on far more than grades,” said Lipscomb. “We try to introduce them to professionals in their field through networking events and internships.

“We teach them to write more effectively, and they create projects across multiple platforms of media that they can use to showcase their skills,” Lipscomb continued. “Last year, as an example, Professor Tamara Jeffries held a workshop on interviewing techniques and discussed her experience interviewing Oprah Winfrey for an Essence magazine cover.”

She’s also appreciative of her visual director, Braxton Langston-Chapman, her parents, Jermail and Brandi Shelton, her grandmother, Cynthia Woodley, her Aunt, Shafon Scott, and her Godmother, Althea Thompson, for their support.

Shelton, from Stone Mountain, Georgia, learned about Bennett from a family friend who’s a graduate of the Institution. She said she fell in love with Bennett after a visit to Greensboro.

“I’ve made bonds with some Bennett women that I know I’ll keep in contact with for life,” Shelton said. “And I love my major and my professors.”

It appears her professors are just as impressed with her.

“Janiyah Shelton’s photography exhibit showcased her extraordinary work ethic,” Lipscomb said. “She spent many nights working in the studio executing her plan, and many more hours poring over hundreds of photos to make her vision a reality. In the exhibit, she also created a community of young people who could bond over shared experiences and talents. I can’t wait to see what she will take on next.”

Shelton’s post-graduation plans are to become a freelance photojournalist or to work for a major magazine or news station, which will allow her to travel the world taking photographs.

Chances are she’ll one day be able to check that off her list too.

Belles Do It All: Good grades, internships and travel abroad