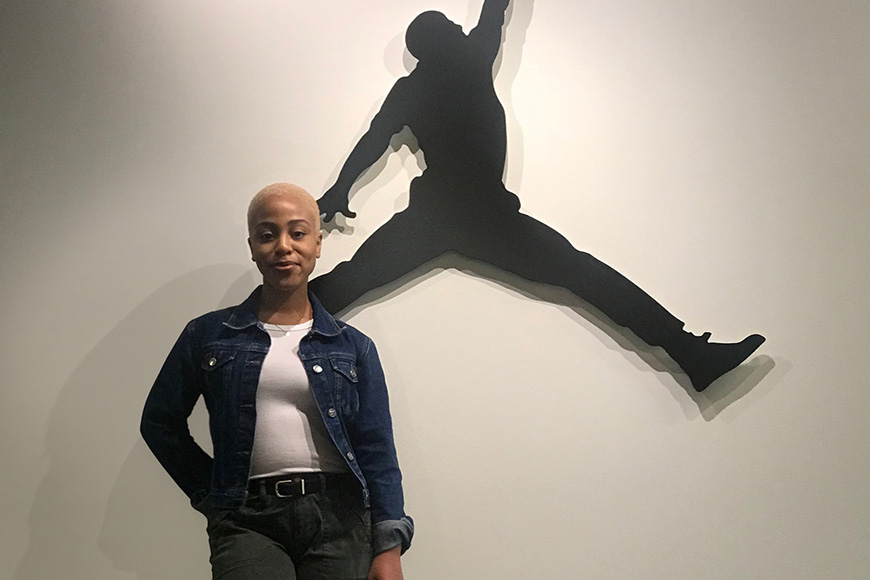 During Ophelia Murray’s first day on her summer internship at Nike, she attended the sportswear giant’s North America meeting. “I got to interact with senior leaders, including some from Toronto and New York. I participated in group activities with them as if I worked there and as if I were part of the team.”

On day two, Murray told Nike employees about growing up in Philadelphia’s inner city and being raised by a single parent after her father’s passing.

“I told them my life has been kind of hard but that I’m a rising senior at Bennett College and I’ve studied abroad and I’ve made it out of basically nothing,” Murray said. “People were in there crying and showing so much love and support and really embracing me as family.”

Murray graduates from Bennett in the spring of 2019. However, this summer the political science major and aspiring attorney is making a name for herself at Nike’s world headquarters in Beaverton, Oregon.

“The Jordan Brand’s Wings Scholars program is dedicated to helping Ophelia and other young people reach their highest potential through the power of education,” said Shauncey Mashia, global community brand manager for the Jordan Brand. “Ophelia embodies the core values of Wings and strives for the highest standard of greatness as a college student and intern.”

Suffice it to say, Murray’s internship has gotten off to a great start.

“For my first two days the tone was set and the bar was high,” she said. “I just felt like from that point forward it was someplace I belonged, where I felt appreciated and valued.”

This summer, Nike has 216 interns from various U.S. colleges and universities. Only three, including Murray, work specifically for the Jordan Brand.

“I had no idea Shauncey was going to ask me to speak,” Murray said in a phone interview. “But the Jordan Wings Program pays my tuition so I’ll do anything for her. She texted me after my first day and asked if I could come to the meeting and tell what the scholarship has done for me, what it means to me and how it has impacted me.”

Murray’s internship ends on August 16. Instead of returning to Bennett this fall, she will study abroad at Westminster University in London.

“Bennett has definitely prepared me for all of this,” Murray said. “Everything that Bennett teaches, including diversity and inclusion, sisterhood, self-discipline and how a woman should represent herself has bode well for me this summer at Nike.”

When speaking publicly or working on a major project, Murray visualizes how her biggest Bennett influences, Dr. Gwendolyn M. Bookman and Dr. Santiba Campbell, would handle themselves. Bennett College President Dr. Phyllis Worthy Dawkins said students like Murray – and professors like Bookman and Campbell – are a testament to the Institution’s strength.

“Bennett College has many talented students who, like Ophelia, are excelling academically and outside the classroom,” Dawkins said. “We’re grateful to Nike for giving Ophelia such a wonderful opportunity this summer, and we hope Bennett’s relationship with Nike continues after Ophelia’s internship ends.” One of Nike’s marketing managers offered Murray the chance to shadow him, so the two met in mid-June. “He gave me advice on how I can get the most out of this internship and how to succeed in it,” she said. “He was encouraging and gave me a new way to look at everything. He told me to network and to meet as many people as I can.”

Additionally, Murray expects to get an assignment from Nike’s legal department. “I’ve met with someone in legal but haven’t been given my project yet,” she said. “I sat in on a meeting about how different contracts are developed, during which they broke down the contracts and showed what both parties felt were appropriate. It was kind of like watching a lawyer formulate a contract.”

Though the internship keeps her busy, Murray talks by phone or text to her mother Shelcia Collier daily. She’s also incorporating fun into her time in the Pacific Northwest.

“Portland is beautiful. I go hiking, I go to the lake, I exercise and I do yoga,” Murray said. “I’ve made so many friends and actually found a Bennett soror who crossed in 2001. She’s been showing me around Portland and introducing me to other AKAs. Life is great!”

Undoubtedly, Murray’s Nike experience will have a far-reaching impact on the Bennett Belle from Philly who constantly illustrates what it means to soar.

Bennett College nominated for 'LEAD Innovation' by HBCUgrow Awards - Here's how to vote!