Home Bennett Inside Tom Lipscomb, a professor for the ages 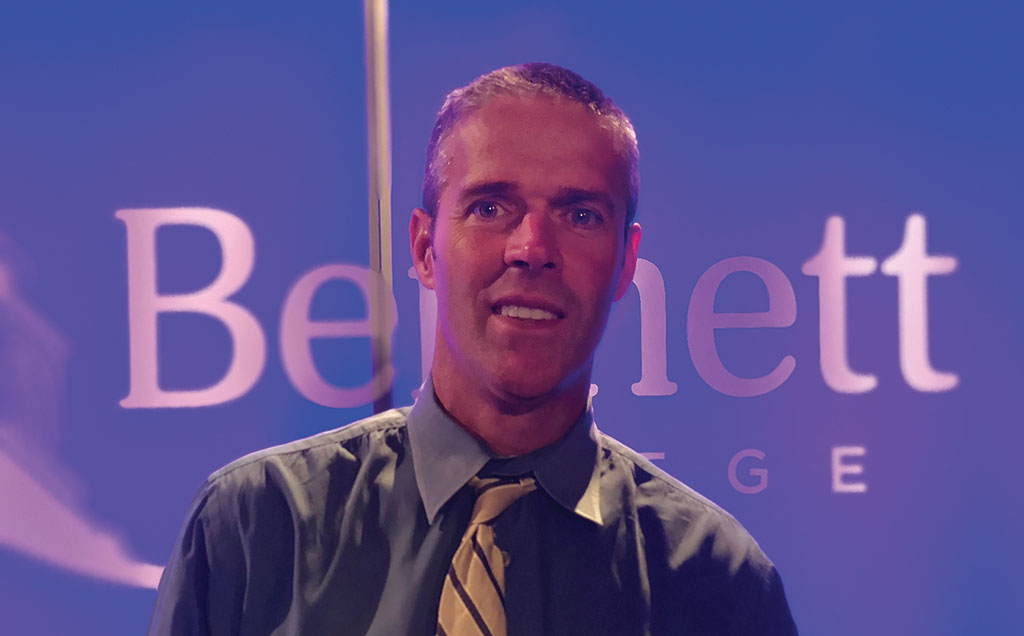 There’s an adage that says, “Students don’t care how much you know until they know that you care.” Perhaps that’s why many of Bennett College’s Journalism and Media Studies students gravitate to Tom Lipscomb.

He demonstrates his care for Bennett students from working extra hours to help students create near-perfect news segments to using his limousine to transport them to off-campus events.

“Tom makes himself available to help students create media projects morning, noon or night,” said Keonte Coleman, interim dean of professional studies and an assistant JMS professor. “He has a selfless spirit, and he places the students, the department and the College before himself.”

Lipscomb, a native of Lynchburg, Virginia, came to Bennett after teaching a few classes in video production at UNC Greensboro. When he initially toured Bennett, the JMS Department was housed in a trailer and had only a handful of Mac computers.

“I met a couple of students who were very eager to learn how to edit media,” Lipscomb said. “Even though I was new to the field, I’d gotten pretty good at editing and thought it’d be really fun to teach a class in addition to doing my own work with my video production company.”

Lipscomb was hired part-time at Bennett and fortunately became full-time along the way.

“Mr. Lipscomb is one of the hardest working men I know,” said Ebony Duell, a sophomore JMS major from Raleigh. “I’ve had a lot of great professors at Bennett, but Mr. Lipscomb is a professor and mentor to me. He stays extra hours most nights to be around for students who need help outside of class.”

Duell said Lipscomb sometimes comes to campus on weekends to assist students and knows many of them by name – not just those majoring in JMS.

“Mr. Lipscomb works hard, is there when you need him and never asks for any recognition,” Duell said. “He’s helped me throughout my Bennett experience, and I’m not sure there’s enough time in the day to say how amazing he is.”

No matter how much praise is heaped upon Lipscomb, don’t expect it to go to his head. Last year when he was voted Outstanding Faculty Member by his colleagues, he seemed almost embarrassed by the attention.

And though he worked in concert with Coleman and Interim Department Chair Tamara Jeffries to bring a state-of-the-art TV and photography studio to the College, he seemed reluctant to stand in a photo with students at the January unveiling, saying he didn’t want to steal their thunder.

“Professor Lipscomb works tirelessly to ensure our Journalism and Media Studies students are well prepared,” said Bennett College President Dr. Phyllis Worthy Dawkins. “Last year I was interviewed by a fresh woman JMS student, and I was very impressed with her questions and preparation. I’m sure Professor Lipscomb, who accompanied her on the interview, deserves some of the credit.”

Lipscomb hails from a family of educators. His mother, Elizabeth Lipscomb, is a retired professor from Randolph Macon Women’s College (now Randolph College), where she taught for more than 40 years. His brother, Bill, is a Rhodes Scholar who works in Climate Science in Boulder, Colorado. His brother, George, is a professor at Furman University in Greenville, South Carolina.

Working at Bennett where the faculty-student ratio is 9:1 affords Lipscomb the chance to get to know his students.

“I really like our JMS students because they’re very loyal,” Lipscomb said. “I put a lot of energy into encouraging them to commit themselves to learning new technologies so they can produce. I want them to be curious and to have the strength to follow through on their ideas.”

Apparently, Lipscomb has always gone above and beyond – even for students with whom he was once in competition.

UNCG Professor Matt Barr taught Lipscomb three classes in the University’s MFA program and said he was always gracious to his classmates.

“Our MFA Program at that time admitted about 12 students, who did their own projects but relied on their cohorts to help in the entire process of filmmaking ranging from pre-production to production to editing,” Barr said. “Tom gave selflessly to his fellow students, to an unusual degree. I think his attitude was, the more I give the more I learn.”

Barr said he thinks Lipscomb’s passion for education comes from his father, Lloyd, a retired minister.

“I think the educational part of the ministry rubbed off on Tom,” Barr said. “He deeply believes in the core mission of teaching and wants to help each student do her or his best. As a professor myself, I’ve learned that motivation is a key factor in student success. Tom works tirelessly to motivate his charges.”

Just as he loves inspiring students, Lipscomb also loves playing soccer. In fact, he and his brother, George, won a Soccer Six National Championship in 2016.

That he’s an avid soccer player is fairly well known around Bennett, and almost virtually everyone on campus knows about his three-wheeled elliptical bike and limousine. He purchased the bike after hip replacement surgery several years ago and now rides it five to 10 miles daily.

He bought the limo for use on personal special occasions but has taken Bennett students to off-campus functions in it, including a media workshop at Wake Forest University and a Learning Communities trip to watch a Tyler Perry movie.

Lipscomb credits his success at Bennett, in part, to his colleagues. “I’ve never enjoyed a working team more than Professor Jeffries and Keonte Coleman,” he said. “They’ve been instrumental in bringing out my best work and ideas and giving me encouragement in challenging situations as well.”

Coleman said the Department is fortunate to have him.

“Tom secured a programming spot on Sirius XM’s HBCU channel 142 and has been the driving force behind the JMS Black History Month Media Festival the last three years,” Coleman said. “He’s also stepped up to spearhead Bennett College’s transition into online learning. I don’t know how many hours Tom sleeps, but I know he devotes a lot of his waking hours to trying to help JMS majors reach their full potential.”