Home Bennett Inside Twice As Nice: Graham Twins Are Ready to Take the World by Storm 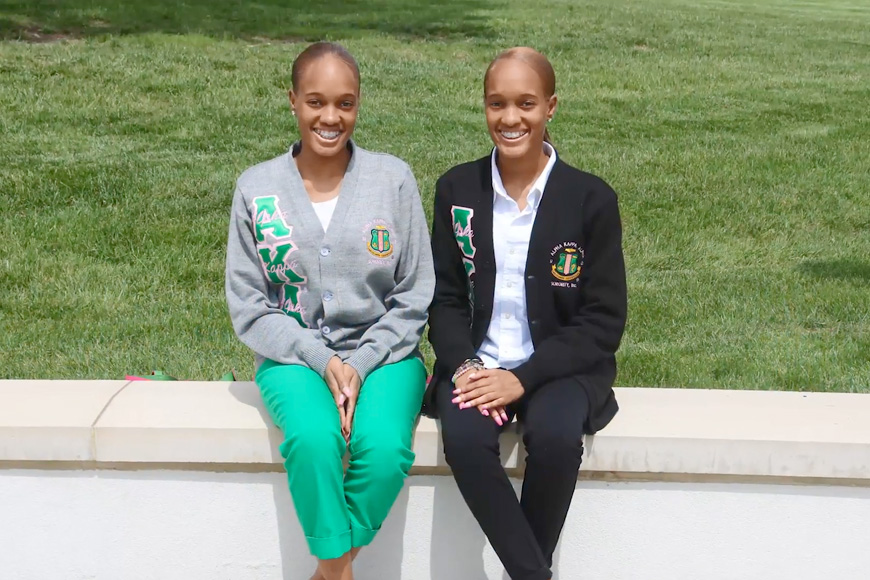 During their four years at Bennett College, sisters Cierra and Imani Graham did pretty much everything together:

They majored in psychology and minored in sociology; got inducted into the Psi Chi International Honors Society; joined Sisters of Service and were initiated in the Zeta Xi Chapter of Alpha Kappa Alpha Sorority, Inc. That they did so much together isn’t surprising given Cierra and Imani are twins.

“I don’t think my classmates were used to having twins on campus,” Cierra said. “Even as we were approaching graduation they still tried to tell us apart and figure out our differences.”

It was common to see “the twins” together on campus, and one of their favorite hangout spots was the patio area in the back of the Global Learning Center.

From Washington, D.C. and the parents of Yolanda Carey and Michael Graham, the women said they initially heard about Bennett from an alumna who is a close family friend.

“We’re grateful for the opportunities we received at Bennett College and are ready to enter a new chapter of our lives while taking with us all the things we learned at Bennett,” Imani said. “What we liked most about Bennett was the student/teacher ratio because the class size made learning less intimidating and allowed students to reach their full potential.”

It’s fair to say the women reached their potential and then some. Membership in the Psi Chi International Honor Society means they maintained a minimum GPA of 3.0. They also held offices in Sisters of Service – with Cierra as the club’s secretary and Imani as its publicist.

In addition, they tried to help recruit for Bennett by serving on a panel in their hometown and sharing their Bennett experience with others.

They say among their fondest Bennett memories was going to Charleston, S.C., because they’d never been to the Palmetto state. Now that they’ve graduated, they plan to intern at a law firm this summer and enter graduate school in the fall. Imani wants to practice criminal law; Cierra wants to practice family law.

The women say they will miss Bennett College.

“We’re going to miss all the women we met at Bennett who became our friends, our sisters or who helped us in some way,” Cierra said. “Their support was really vital to us throughout our four years.”