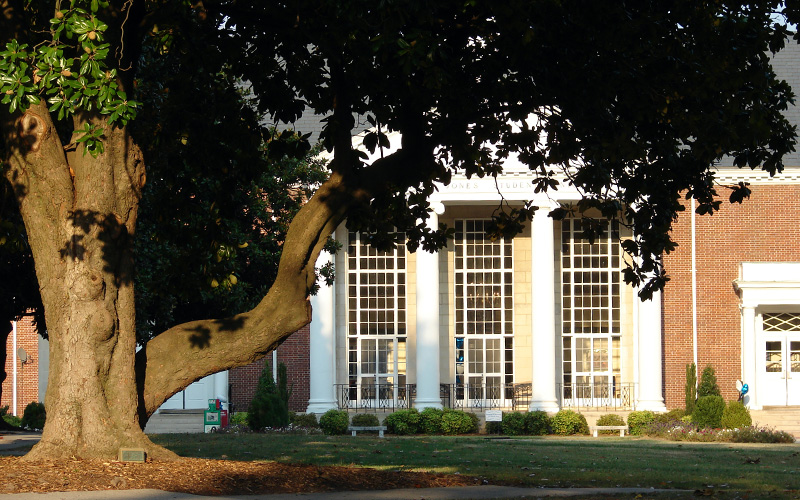 Twins Shareka R. Brown and Tameka R. Brown found out about Bennett College through St. Paul United Methodist Church in Winston-Salem, North Carolina, where they’ve been members since they were toddlers.

Talk about a blessing.

The women, members of the class of 1997 and now in their early 40s, say they couldn’t be happier to be Bennett Belles.

“We chose Bennett because of the small, intimate, nurturing and caring atmosphere we felt when we visited during a college tour with the Western North Carolina Conference of the United Methodist Church,” Shareka said. Added Tameka: “Our mother, Patricia Brown-Kinnard, set the foundation that Bennett filled in by providing the structure which helped us become the women we are today.”

Shareka is an academic counselor at Davidson County Community College, where she works with first-generation and low-income students. Tameka is a cytogenetic technologist for Wake Forest Baptist Health, a job that requires her to notify people when they’ve been diagnosed with leukemia. The twins credit Bennett College with enabling them to secure such important jobs.

Across the world, Bennett Belles just like Shareka and Tameka are making their mark on society. And during Week Three of the Six-Week Crowdfunding Campaign to raise $1.5 Million for the Johnnetta Betsch Cole Scholars, Bennett graduates are sharing why they’re grateful for the institution.

“We’re grateful for the stellar education we received at Bennett, for the sisterhood we gained for life and for the fact that when people learn we’re Bennett Belles that automatically lets them know we are unique, phenomenal women,” Shareka said. “Bennett also helped instill a sense of purpose in us. Tameka and I were first-generation students, and being able to go to Bennett helped ground us academically, culturally and socially.”

Although Shareka and Tameka were the first in their family to attend college, they weren’t about to keep Bennett to themselves. They took their Goddaughter, Kayla M. Davis of Winston-Salem, with them to Alumnae Weekend and to a few White Breakfasts so she could see for herself just how special Bennett is.

Today, Kayla is a Bennett freshwoman who’s considering a career in business administration.

“I’m grateful because Bennett allows me to be curious and passionate about my education,” Kayla said. “I love being in the environment of other pioneering young women. Bennett offers me the opportunity to develop intellectually, personally and academically. I feel Bennett College is rooted in historic traditions that help with promoting empowerment and the development of the female mind. I’m very grateful to my Godmothers for introducing Bennett College to me.”

Shareka and Tameka are active alumnae. Shareka is president of the institution’s Winston-Salem Alumnae Chapter, both women attended the August Alumnae Retreat held at the Global Learning Center and they rarely miss an Alumnae Weekend or a chance to support their alma mater. They hope the $1.5 Million Johnnetta Betsch Cole Crowdfunding Campaign is successful.

“I hope the Campaign is prosperous so that Bennett can continue developing young minds locally, nationally and globally,” Shareka said. “Bennett College is a jewel that took two young girls who were born and raised in Winston-Salem and hadn’t traveled much outside of North Carolina before enrolling in college and transformed them into successful women who have now traveled abroad both through Bennett and personally.”

While at Bennett the sisters went to Zimbabwe, in southern Africa, with the College Choir. In 2011 they traveled to Japan with the United Methodist Church. Next year they’re going to Dubai on vacation.

The twins and their Goddaughter said there are so many reasons to be grateful for Bennett College. So please #Add2thePot of Black Girl Magic by making a donation to the Johnnetta Betsch Cole Scholars Campaign and by using #Thankful4 @BennettCollege to share with the world why you’re thankful for Bennett.