Home Bennett Inside What Matters 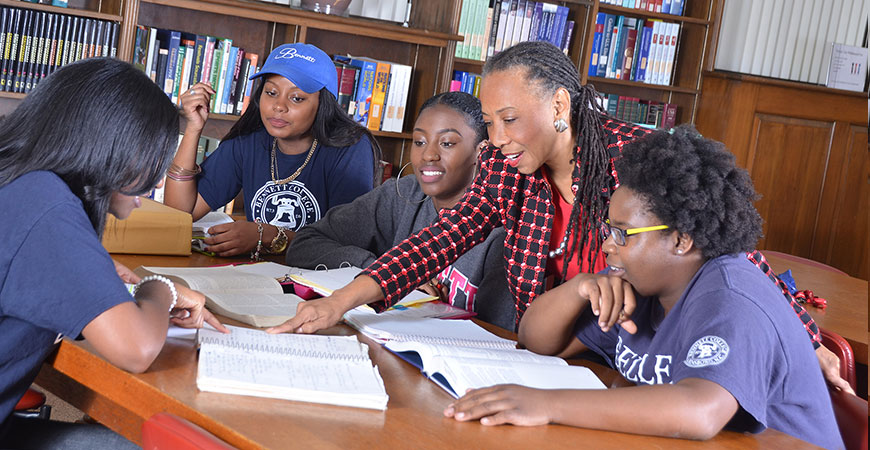 As a former Affirmative Action officer in the 1980s at two predominantly white New England post-secondary institutions, I have been fascinated this semester by my Affirmative Action discussions with my students in the course American Judicial Process at a southern post-secondary historically black college (HBC) for women.  We have spent a considerable time on the 14th Amendment, exploring equal protection through our reading of the Supreme Court opinion in Grutter v. Bollinger, 539 U.S. 306 (2003) (race as a factor in student admissions at the University of Michigan Law School) and through our viewing of The Constitution: That Delicate Balance, Affirmative Action versus Reverse Discrimination, Episode 12 (1984) of the Emmy Award-winning series produced by the Columbia University Seminars on Media and Society.  Other readings have also provided material for lively discussion and debate. Particularly engaging have been those that focused on the structural or systemic nature of racism as part of the fabric of our society that advantages and privileges some groups, while disadvantaging others.  (Eitzen, D. Stanley, Maxine Baca Zinn and Kelly Eitzen Smith,”Chapter 8, Racial and Ethnic Inequality,” Social Problems, 13th ed.  Boston:  Pearson Education, Inc., 2014.)

Having grown up in the South, prior to the Civil Rights Act of 1964, I am very familiar with the segregated water fountains, buses and theaters.  I am struck by how recent these realities are for African-Americans in this country and how oblivious some of the members of the younger generation are of these challenges.  My son at one point several years ago remarked that he thought the segregated facilities mentioned above were true of my mother’s generation, not mine.  My mother is 98 and I am 68.

Unquestionably we have moved forward since the 1960s in rectifying some of the ills of our society.  But, we are a far cry from a post-racial society or one that is color-blind.  Race continues to be a limiting factor in the United States in many arenas.  We have inherited the current societal structure by which we are either advantaged or disadvantaged, even if through no actions of our own.

The history of this country—and its very founding documents—point clearly to the systemic nature of the challenge before us.  De jure (from law, according to law) discrimination was soon replaced by de facto (from fact, in fact, in reality) discrimination.  I submit that de facto discrimination is alive and well.

When I was actively engaged in Affirmative Action work and when I had conversations with my communities about it, we had a clear understanding that we must always start with the premise of a pool of qualified candidates.  Affirmative Action is not and should never have been associated with an unqualified candidate being hired because of his or her race, gender, etc.  The problem was that these discussions often resulted in statements about the fiction that one can determine most qualified through a black and white, look at the numbers, process.

Those of us who have been in hiring authority, even in academia, know that most qualified cannot be quantified.  When you are bringing together a team to achieve any objective, beyond a set of criteria that makes each person qualified to do the job, the most qualified candidate is less clearly discernable.  Each person brings unique qualities to the endeavor. What makes a person most qualified depends on a number of factors, such as how well the person fits or how the person augments talents and skills already present in the group.  It is this complexity that makes most qualified difficult to reduce to numbers.
Where there has been exclusion, those endeavors lose when important voices are missing in the conversation. Given the history of our country where we have had generations of exclusion based on race and the continuing reality of exclusion—intentional or otherwise—I consider it a societal imperative to diversify the classroom and the workforce by intentionally including persons of color, women and others who have been denied entry, where their voices are not, and have not been, present.

My position is that diversity in teams produces the best results because of the varied experiences that diversity brings.  Yes, let’s strive for a time in the United States when race is no more a factor in any decision about a person than whether the person prefers tea rather than coffee and when the exclusions promoted by systemic discrimination no longer exist.  We have not reached that day yet.  Until then, as individuals of conscience, we have an affirmative obligation to promote public policies and practices (such as intentional inclusion) to bring in those who have been excluded in the past in order to alleviate, and ultimately to eliminate, this social problem.