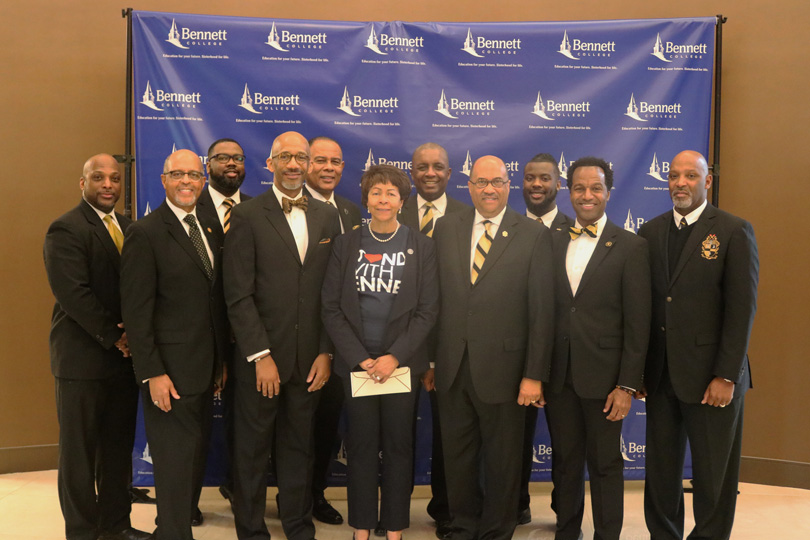 GREENSBORO, N.C. – Alpha Phi Alpha Fraternity, Inc., the nation’s oldest African-American fraternity, donated $31,000 to Bennett College on Jan. 19 to aid the Institution in its quest to raise a minimum of $5 million by Feb. 1.

“Alpha Phi Alpha is honored to present to you a check for $30,000,” General President Everett B. Ward, Ph.D., told Bennett President Dr. Phyllis Worthy Dawkins inside the Institution’s Global Learning Center. “In addition, Alpha men around the world are going to make contributions to Bennett College. God bless you and the women of Bennett College and know that the men of Alpha Phi Alpha support you.”

Chuck Wallington, President of the Kappa Lambda Chapter of Alpha Phi Alpha, said Bennett College “is a phenomenal asset to the community” that deserves to be supported. He presented Dawkins with a check for $1,000 from members of the Greensboro chapter.

“On behalf of Bennett College’s Board of Trustees, our faculty, staff and students, thank you to the men of Alpha Phi Alpha for recognizing and standing with Bennett College,” Dawkins said.

After the check ceremony, which included about a dozen members of Alpha Phi Alpha, Ward, who is President of St. Augustine’s University in Raleigh, said he hopes other fraternities and sororities will also support Bennett College. “All of our organizations are dedicated to preserving scholarship and ensuring the intelligence of the world is preserved through institutions like Bennett College.”

Alpha Phi Alpha was founded in December 1906 at Cornell University in Ithaca, New York. Among the fraternity’s most notable members are Dr. Martin Luther King, Jr. Ironically, the slain civil rights leader spoke at Bennett in February 1958, when no other Greensboro-area colleges or universities would host him.

In a statement after the check presentation, Dawkins said the entire Bennett family is grateful for the Alpha’s financial support.

“Bennett College is trying gallantly to raise a minimum of $5 million by Feb. 1, and gifts like the ones we received today from Alpha Phi Alpha will go a long way toward helping us achieve our goal. On a personal note, I appreciate President Ward for taking time out of his busy schedule to travel to Greensboro to hand-deliver the check. I know how busy he must be as President of St. Augustine’s University and that his time is valuable.”

Founded in1873 as a coeducational institution, Bennett became women’s only in 1926. Spelman College in Atlanta is the country’s only other all-women’s HBCU.

Bennett has a history of producing outstanding women leaders. For example, Dr. Dorothy Lavinia Brown, a 1941 Bennett graduate, was the first African-American woman licensed surgeon in the south. Dr. Carolyn R. Payton, a 1945 Bennett graduate, was the first woman or African-American to head the U.S. Peace Corps. She was appointed by President Jimmy Carter.

Current Bennett students or recent graduates are equally impressive. Senior Tyler Binion from Nashville, Tennessee, was selected among 63 students from 54 HBCUs to serve as a Competitiveness Scholar through the White House Initiative on HBCUs. Senior Qaleelah Smith of Brooklyn, New York, participated in Drexel University’s Global Health Maternal Child Health Program last summer in The Gambia in West Africa. While in Africa, Smith, an aspiring physician, helped to deliver a baby. And Shani McMichael, a 2018 Bennett graduate who enrolled in the Institution with a 2.3 GPA but graduated as Valedictorian with a near-perfect 3.9 GPA, is now earning a Master of Science in Clinical Psychology at Columbia University.

“Bennett’s rich legacy must be preserved,” Dawkins said in an interview. “The College simply must remain in existence so it can continue serving as a beacon of hope for young women of color for generations and generations to come.”