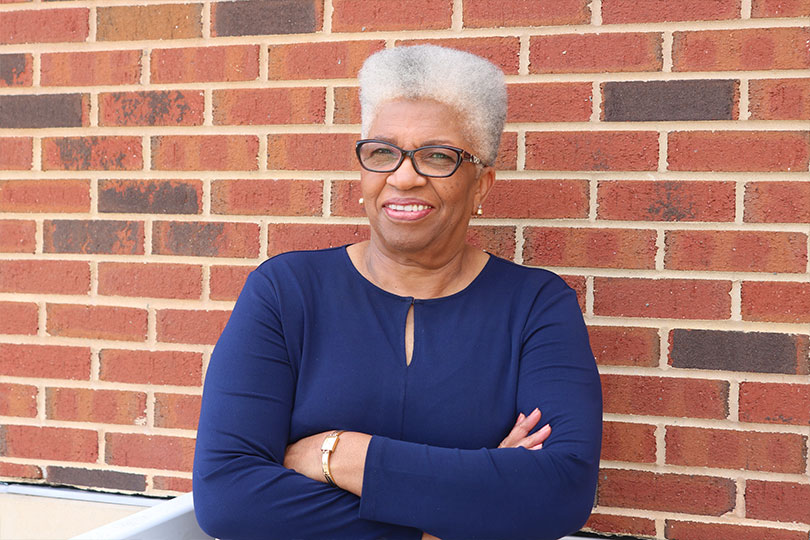 Since graduating from Bennett College in 1969, Dr. Gwendolyn Sneed O’Neal has contributed to her alma mater and attended Alumnae Weekend and other events.

But on June 21, O’Neal’s role at Bennett took a stark turn when she was appointed interim president by the Bennett College Board of Trustees, led by Chair Dr. Gladys Ashe Robinson ’71.

Not one to enter situations blindly, O’Neal, who is unapologetically Christian, stepped into the role knowing Bennett is fighting to increase enrollment, raise money and win its lawsuit against the Southern Association of Colleges and Schools Commission on College, which last Dec. 11 removed Bennett from membership. Bennett remains accredited by SACSCOC as its lawsuit plays out in the courts and is also seeking membership in the Transnational Association of Christian Colleges and Schools, or TRACS.

Righting the ship at Bennett is a daunting task to say the least, but O’Neal firmly believes in Philippians 4:3, which says, “I can do all things through Christ who strengthens me.” Moreover, O’Neal knows that on Aug. 1 when Suzanne Walsh, J.D. officially assumes the presidency, she will begin serving her alma mater in a different role — as Chief Operating Officer.

“It is a faith walk for me for several reasons,” O’Neal said. “I’ve found myself in a lot of situations with which I’d had no prior experience, but in all cases I found success so I have to believe that success will happen in this situation as well. I had no intention of ever going back to work, so I wasn’t looking for this, but I have to believe that there is a reason for it and that everything is going to work out to Bennett’s good and to God’s glory.”

Jackie Powell Jones ’69 has known O’Neal since the two were classmates at Bennett and isn’t at all surprised that she has stepped into the role of interim president.

“She was really focused on getting things done, doing her work and getting out of school,” said Powell Jones, who retired 10 years ago after spending seven years teaching in Baltimore City Public Schools. “She was a very good student. We always thought Gwen would be the ideal president for Bennett, and I always told her that.”

Powell Jones said she and many other alumnae are excited to have O’Neal at the helm as Bennett prepares to embark upon the 2019-2020 academic year — even though her role as interim president will be short-lived.

O’Neal, who loves reading, collecting African-American art and traveling, said she’s counting on family and friends like Powell Jones to help her as she works diligently to ensure Bennett returns to its glory days and continues producing outstanding graduates who go on to attend major institutions — including Ivy League schools — and become leaders in fields ranging from education to law enforcement to journalism to medicine to politics.

“I’m counting on not only them, but also on my spiritual sisters and brothers,” said O’Neal, a member of Mount Zion Baptist Church in Greensboro. “I’m relying on them to keep me lifted up in prayer because I know from where my strength comes. I have a whole cadre of people who are praying for me and for Bennett from all across the country. I’ve gotten many notes, texts and emails from people in New Jersey, Ohio, Kansas, Texas, Georgia and other places. The word has gotten out and everybody has been encouraging. I’ve gotten wonderful cards and letters, even from former faculty at Bennett and especially from my Bennett classmates.”

Powell Jones, who spent 20 years working as an environmental chemist for the state of Maryland and also worked as a public health researcher in New York City before becoming a teacher, said she has no doubt that O’Neal will be successful at Bennett.

“As long as she has a prominent position at the Institution to remind people of the mission of Bennett College, that’s fine,” Powell Jones said. “She lives in Greensboro and will always be a part of Bennett — period. Whether she’s on campus in an official capacity is irrelevant. Because of the way they feel about Bennett, some people are always advising and always making recommendations and she’s one of those persons. I think she will say things in such a way that people will understand and act accordingly.”

For her part, O’Neal has been putting in 12-hour days, even working on the weekends since taking over the helm. Her love for Bennett is what motivates her.

“We need to be certain that things are in place for the beginning of the school year, and when you come in new you spend a lot of time assessing the situation to see where things are, as well as time learning how things operate in an environment in which you have not been,” O’Neal said. “I feel we have made substantial progress, and I’m certain that when the students and parents arrive on campus in August they’re going to have a positive experience and they’re going to see clearly that Bennett is alive and that we’re moving forward with excellence.”