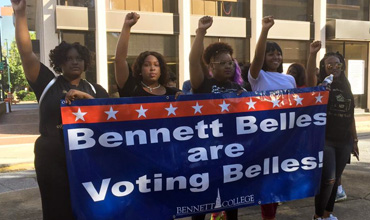 GREENSBORO – About two dozen Bennett Belles marched to the polls Tuesday to exercise their right to vote in an effort that was led by senior Journalism & Media Studies major Azuree Bateman.

The march was sponsored by the Bennett chapter of the NAACP, for which Bateman serves as president, and was held in conjunction with students from North Carolina A&T State University, members of the North Carolina Black Women’s Roundtable, Blueprint N.C and Democracy North Carolina.

Before the march, Bennett students gathered in front of the institution’s public safety office to distribute signs to carry during their walk.

“I felt very good about the march to the polls,” said Bateman of Charlotte, who’s also editor-in-chief of Belle Magazine. “As we got closer to our destination students got more and more excited and the chants got louder. The chants got so loud that the A&T students said they could hear us before we even approached!”

“I’m glad I was able to do something to keep my sisters engaged in what was going on because it’s important for us to take part in the political process every chance we get,” Bateman said. “People died for us to have this right, and if we don’t participate in the election process I feel we have no grounds to complain if we don’t like the laws that are passed by our elected officials.”

Bateman said she organized the march to the polls to shine light on black women and also to help her classmates understand the political power they hold.

“I think sometimes it’s easy for people to marginalize or discount people in my generation because they assume we’re just living for the moment,” Bateman said. “But I know in the case of Bennett Belles nothing could be further from the truth. From the time we arrive on campus, we’re taught the importance of being registered to vote and of actually going out and voting. Bennett also has provided for us some great examples of women who have been or continue to be important political figures. Examples include Dr. Dorothy Lavinia Brown, Yvonne Johnson and Dr. Gladys Ashe Robinson.”

For years, it has been a tradition for Bennett Belles to march to the polls. They are often joined by faculty and staff members and sometimes elected officials. On Tuesday, Dr. Karla McLucas, Bennett’s coordinator of research and projects in the Office of Institutional Effectiveness, joined the students as they marched to 301 W. Market Street.

“I’m glad I was able to show students the power we possess in politics,” Bateman said. “Students were able to help vote in one of the most critical elections in Greensboro. What we did on Tuesday was very important, and I’m glad I could make it happen.”