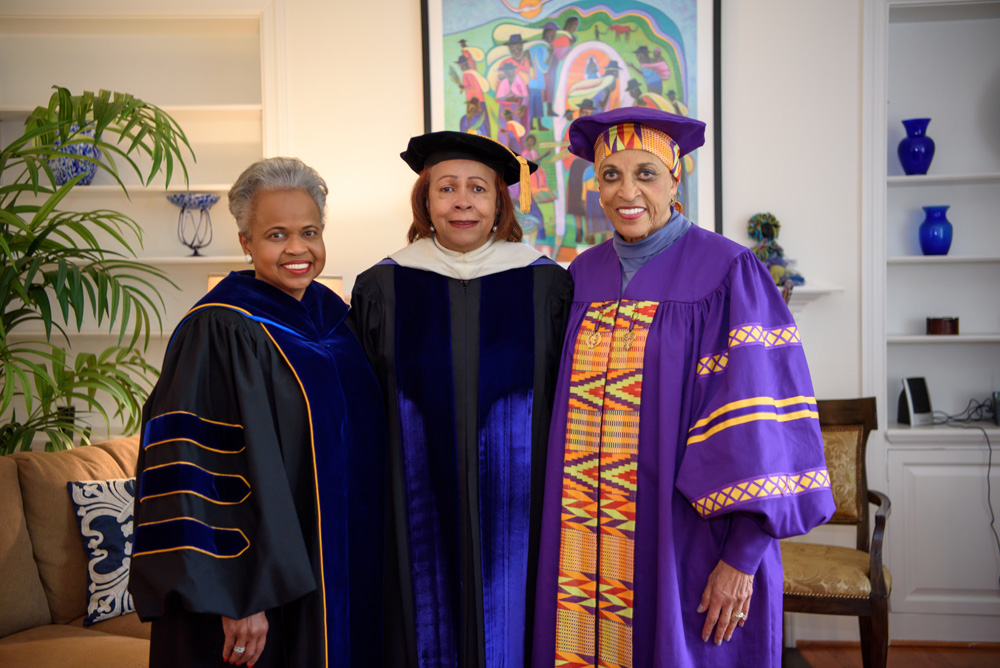 In an outstanding speech in which she called on people to continue the trends of activism that have permeated American Society for decades, while also asking people to donate money to Bennett College, Dr. Johnnetta Betsch Cole delivered the institution’s 2017 Founder’s Day Convocation keynote address on November 5.

Cole, President Emerita of Bennett College and it’s 14th President, did not disappoint as she spoke eloquently about the rich history of Bennett College, the state of our nation and the need to ensure that Historically Black Colleges and Universities like Bennett continue to exist.

During her speech inside the Annie Merner Pfeiffer Chapel, Cole referenced the horrific event that occurred in Charlottesville, Virginia, in early August, claiming the life of protestor Heather Heyer. She urged everyone inside the Chapel to stand up for what’s right.

“And so, my sisters and brothers all, I charge you as I charge myself to stand up, speak out and act in the interest of what is right and just,” Cole said. “In our minds let us recall the beat of reggae music as Bob Marley sang, ‘Get up, stand up. Stand up for your rights: Get up, stand up. Don’t give up the fight.’”

Cole also implored people to donate to Bennett, an institution that was founded in 1873 in the basement of what is now St. Matthews United Methodist Church, and later became an institution for women only in 1926.

“My sisters and brothers all, I want to clearly and unequivocally declare that protecting and sustaining Bennett College is a necessary form of activism that we all are called to carry on,” Cole said. “The extraordinary education that Bennett offers is an education that helps women acquire the intellectual tools they need to live productive lives as global citizens. A Bennett College education encourages students to stand up against the kinds of prejudice and oppression that they and so many others face.”

After the Convocation, a ribbon cutting ceremony was held for the naming of the Johnnetta Betsch Cole Honors Residence Hall, for which Cole is spearheading a campaign to raise $1.5 million. Money raised from the campaign will be used for scholarships for the students living in the residence hall bearing Cole’s name. The Honors Residence Hall has 140 beds and was constructed in 2010.

“This is a campaign that some would say has no possibility of succeeding,” Cole said of the $1.5 million initiative. “But as President Nelson Mandel once said, ‘it always seems impossible until it is done.’ Indeed, as someone once said, an activist’s moment is not the moment of change; it is the period when change seems impossible. It is important to say that raising these substantial scholarship funds will also address the urgent need for Bennett College to demonstrate that she is on the road to financial stability.”

The naming ceremony was followed by a silent auction and a reception inside the Global Learning Center on Bennett’s campus. Congresswoman Alma S. Adams, who represents North Carolina’s 12th District and who taught art history at Bennett College for 40 years, was among the speakers at the naming ceremony.

Bennett College’s 18th President, Dr. Phyllis Worthy Dawkins, who was appointed the institution’s leader on July 5, 2017, presided over the Convocation and ensuing activities.

“We had a great Founder’s Day event and a good turnout on November 5,” Dawkins said. “Dr. Cole delivered an excellent speech, and I think Bennett alumnae, faculty, staff, students and friends of the College are ready to get behind us to make the $1.5 million Johnnetta Betsch Cole Scholars Campaign successful.

“There are plenty of deserving young women in the Honors Residence Hall who at times need gap money to complete their studies,” Dawkins continued. “We also have academically gifted high school students who want to attend Bennett but lack the necessary funds. Money raised in the Johnnetta Betsch Cole Scholars Campaign will enable us to offer more attractive, more competitive scholarship packages to those prospective students.”

“I’m grateful we had such a successful event, and now I look forward to rolling up my sleeves and working with Dr. Cole, my staff and others to ensure we raise the $1.5 million,” Dawkins said.