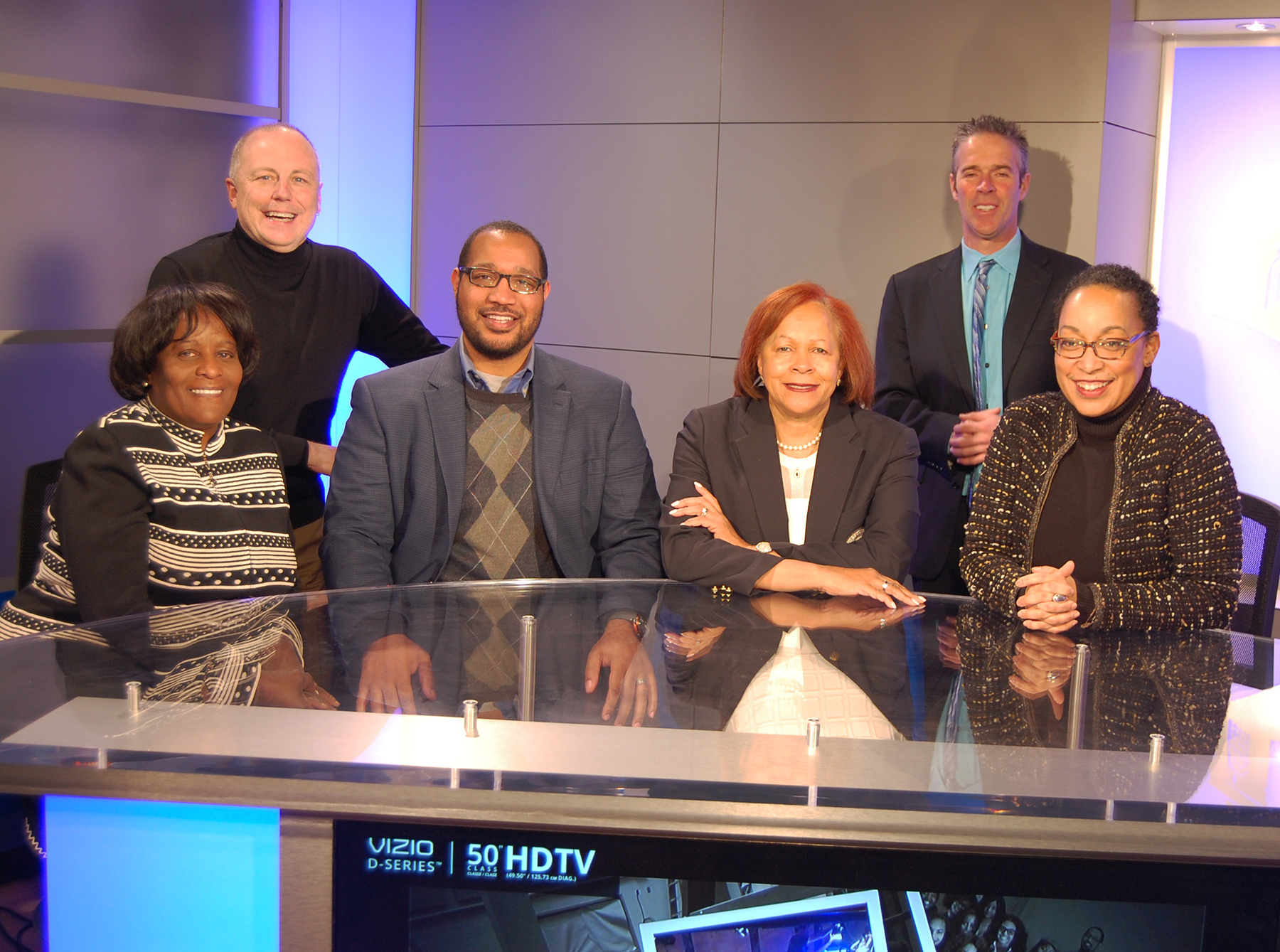 GREENSBORO, N.C. – A robust crowd, including representatives from a U.S. Congressman’s office, attended the unveiling of Bennett College’s new, state-of-the-art TV and photography studio on January 9.

Housed inside the Julianne Malveaux Journalism Building at the corner of Washington and Bennett streets, the new studio will enable Bennett College students to be on the cutting edge of media production. Journalism and Media Studies is one of the top five majors at Bennett College, and Bennett’s JMS students are known for producing top-quality work.

Keonte Coleman, interim dean of Professional Studies and an assistant professor of Journalism and Media Studies, could hardly contain his excitement as he asked attendees to crowd into the nearly 500 square feet studio before turning on the lights to reveal an anchor desk with a 50-inch 4K monitor, a 70-inch 4K monitor, a flexible set with interchangeable panels, a light panel through which different color lighting can be displayed, a green screen, white and black backdrops for photography and cushioned chairs for interviews.

The studio was the brainchild of Coleman, who says Bennett Belles deserve to work in a professional studio that rivals studios on college campuses across the country. Coleman has taught at Bennett for seven years and is a former news producer at WXII in Winston-Salem, an NBC affiliate.

“What we have in this space is very flexible,” Coleman said while addressing the crowd during the unveiling. “That was the mandate we gave the companies we worked with. We have a mobile set with walls that pull apart. None of this is attached to the structure. We also have a monitor on wheels…”

Coleman emphasized that while the studio was created with Journalism and Media Studies students in mind, the entire Bennett campus will have access to it and will benefit from it.

Coleman worked closely with Tamara Jeffries, interim chair of the Journalism and Media Studies Department and an associate JMS professor, and Tom Lipscomb, an assistant professor of Journalism and Media Studies, to bring the studio to fruition. Jeffries, an award-winning journalist, served as executive editor of Essence magazine from 2000 to 2004. Last April, an article Jeffries wrote after interviewing TV icon and billionaire Oprah Winfrey was the cover story for Essence.

“The reaction from the students was priceless,” Jeffries said after the studio unveiling. “They’re already planning photo shoots and talking about the shows they’re going to produce. I’m excited for them. They’ve been doing great work using virtual sets and recoding on their smart phones. Now they can take their work to the next level.”

Lipscomb, owner of Tom Lipscomb Productions, works with Bennett’s Journalism and Media studies students to produce a popular segment called The Weekly Ring, which catches viewers up on pertinent news about Bennett College students, staff, faculty and events. For the past two years, he’s taken JMS students to the annual convention of the National Association of Black Journalists.

“The studio is going to make a big difference in how our students learn and in what they produce,” Lipscomb said. “This studio represents a great day for Bennett College.”

Bennett JMS student Ebony Duell, a sophomore from Raleigh, said she was overwhelmed by the studio unveiling turnout. The Department was especially pleased to have Julie Scott Emmons and Olga Perkins in attendance. Emmons and Perkins are the district director and constituent liaison, respectively, for U.S. Representative Mark Walker (R-N.C.)

“I think the studio is great, and I’m excited because I’ll be able to work in it for another two and a half years before I graduate,” said Duell. “I’d like to applaud Mr. Coleman,  Ms. Jeffries and Mr. Lipscomb because they really put a lot of thought into the studio and they really look out for us students.”

Nancy Martins, a sophomore biology major who’s minoring in Journalism and Media Studies, echoed Duell’s sentiments and added that she’s glad students from other disciplines, including social work, biology and psychology, attended the unveiling. Martins, also from Raleigh, said she hopes to attend medical school and become a pediatrician and ultimately join a show like “The Doctors”. The new studio will help her accomplish that goal, she said.

Bennett College President Dr. Phyllis Worthy Dawkins greeted attendees at the unveiling and discussed the College’s talented JMS students. After the unveiling, she said she looks forward to the good work Bennett Belles will produce as a result of the new studio, which was paid for with funds from a SAFRA grant.

“Bennett has some very sharp Journalism and Media Studies students, and I’m sure the new studio, coupled with instruction from Mr. Coleman, Ms. Jeffries and Mr. Lipscomb, will only increase the quality of work they produce,” Dawkins said. “I’m confident our Belles who are majoring in Journalism and Media Studies, as well as other Bennett College students, will take advantage of the new studio.”

Bennett administrators, student interviewed by local TV station about the Time's Up Movement