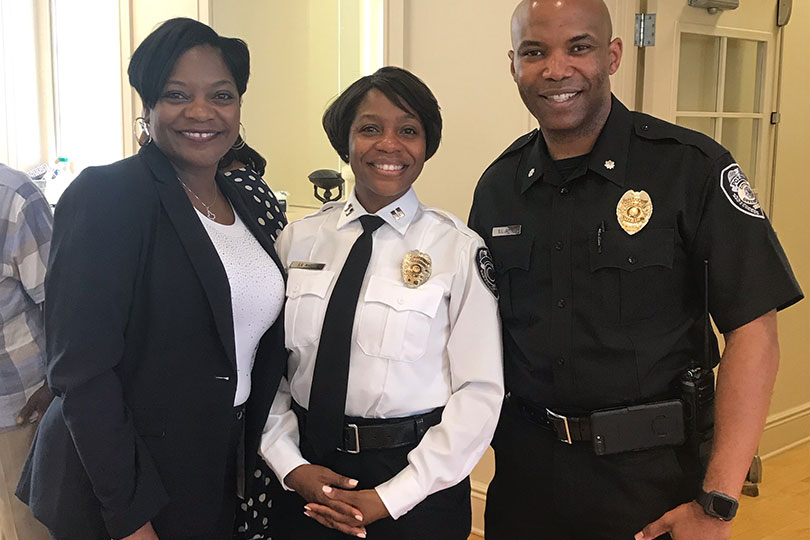 You could say Stephanie Mardis was destined to work in law enforcement.

Her father, Samuel Jones, was one of the first African-American police officers employed with the Tampa (Florida) Police Department. Older sister Sonja Cambridge Wise ’89 is a senior corporal. there.

Suffice it to say, Mardis, 41, has followed in their footsteps while making her own mark in a male-dominated profession. Recently, she made history by becoming one of only two African-American women to rise to the rank of captain in the nearly 700-member Greensboro Police Department. But those who know her well aren’t surprised.

“I fully supported her promotion to captain,” said deputy chief Brian James, who has worked for the GPD for 23 years and known Mardis for 17. “I recognize her as a leader in this department. She displayed leadership qualities early on and showed versatility by taking a number of different assignments throughout the department. Moreover, captain Mardis truly cares about people. I believe that you cannot do this job properly without genuine concern and care for people and she has that.”

Mardis earned a Bachelor of Science in Biology from Bennett College in 2000, with aspirations to become a neonatal nurse. Yet after graduating, she spent several years making prescription glasses for Lens Crafters before landing a manager’s position in a private optometrist’s office.

She didn’t have any issues working in the private office — except that in her heart of hearts she knew it wasn’t what she was supposed to be doing. So one day she picked up an employment packet from the Greensboro Police Department. The rest, as the saying goes, is history.

“Over my four years at Bennett I learned so many life lessons,” Mardis said. “Achievement. Adversity. Grace. Strength. Poise. Disappointment. Heartache and everything in between. I learned the meaning of the words tribe and sisterhood. Bennett taught me about selfless love and community. She also taught me that my birthright was destined for greatness in any and all capacities and environments.”

Mardis knows that by making captain she’s now a role model for young African-American girls — a responsibility she doesn’t take lightly. Although she has certainly put in her dues on the force, she’s quick to give credit for her success to family, friends and at least one of her former Bennett professors.

“Dr. Michael Cotton was and still is the person that made a lasting impact on my life,” Mardis said. “He is the most kind and gentle person I’ve ever met. He cared about every student and I’m sure he was everyone’s favorite professor. I take joy in running into him frequently at my favorite coffee shop. He’s still just as pleasant today as he was over 20 years ago.”

At 5 feet 4 inches tall, Mardis doesn’t have a commanding presence. Additionally, her warm smile often belies her toughness. But make no mistake about it, the single mother of a son, Jackson, is well known around the Gate City as a force to be reckoned with. Like many other Belles before her, she is a shining example of the outstanding graduates that Bennett College produces.

“Capt. Mardis is an excellent role model and has shown what hard work and perseverance can render in a male-dominated profession,” James said. “She is not only dedicated to her profession but gives her time and resources to other community efforts that contribute to the overall wellbeing of our city. She is certainly a leader to watch in the next few years. Her desire to be a police chief is a realistic goal, and I expect her to become Chief of the Greensboro Police Department or of some other jurisdiction before the end of her law enforcement career.”