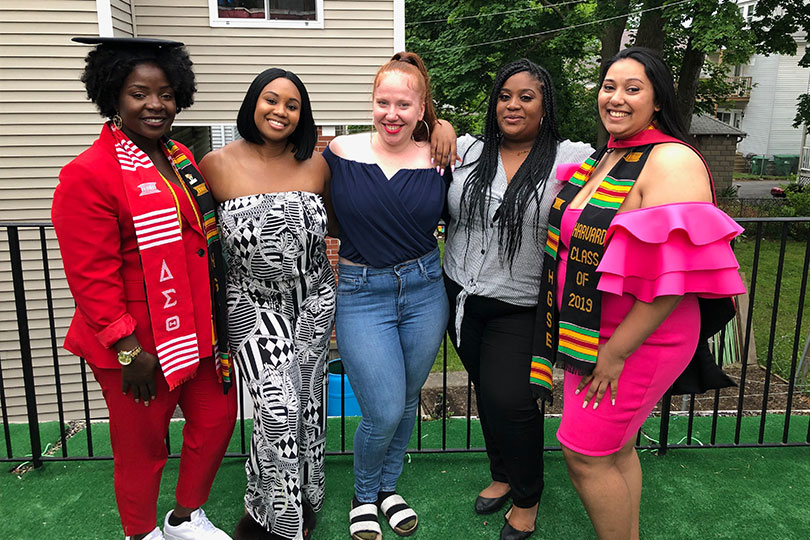 Delrisha White and Usha Nikita Satish both earned bachelor’s degrees from Bennett College in 2013. A few months ago they graduated together again — this time from Harvard University.

White learned about Bennett at a college fair, while Satish learned about the institution from Sonja Hunt-Johnson ’67, her pastor’s wife.

“Bennett recruiter Krystal Toney sold me on Bennett,” White recalled. “She was an alum. She was beautiful. She was passionate about her school and was speaking from firsthand experience.”

Added Satish: “Mrs. Hunt-Johnson graduated from Bennett in the 60s and would always tell me about the institution, so I applied. I loved Bennett. My experience there was phenomenal. I was president of the NAACP, which afforded me a lot of opportunities.”

Opportunities indeed. Satish traveled to more than half of the U.S. states and also to Zimbabwe and South Korea on behalf of the United Methodist Church and Bennett College. White studied abroad in Shanghai, China, during the fall semester of her junior year and became SGA President her senior year

They made the most of their time at Bennett, but suffice it to say they went through a lot before arriving in Greensboro. White enrolled at Bennett from California’s foster care system; Satish came to Bennett from New York, where she’d been homeless.

“As long as I can remember I was in foster care,” White said. “I don’t remember how many homes I was in, but it was more than a few. I really think it was the conditions of foster care that made me want to go to college and do better. I didn’t like going home, either because of the adults, the conditions in the foster home or because there were too many people there. Those conditions made me want to get away, so I made the choice that I was going to go to college (far) away from my hometown.”

Satish grew up in a loving, close-knit environment with her mother and two sisters — until things changed.

“My mother raised me as a single parent, but when I was 17 she started to lose her memory and the doctor diagnosed her with dementia,” Satish said. “We lost our home because mom couldn’t keep up with her checks, and in January 2009 we became homeless. Our friends and family took us in, and at times my siblings and I were separated. I was homeless when I arrived at Bennett.”

Both credit Bennett with helping them get accepted into the Ivy League school widely considered the most prestigious in the world.

“Bennett helped prepare me for Harvard,” White said. “I was in JMS where advisors were hands-on and had higher expectations. I think the work ethic that I acquired in Bennett’s Journalism Department taught me how to become resourceful, how to troubleshoot and how to find solutions to problems and ideas. I was encouraged to be creative, and they really pushed me. I had all of the room to make mistakes and all of the room to recover from those mistakes with their support.”

Added Satish: “Bennett gave me the skills that were necessary to know how to navigate Harvard and to get into Teach for America. Teach for America gave me the skills to get a job at KIPP, Knowledge is Power Program, in D.C. I taught for five years, including two in Miami and three in D.C., and those five years helped prepare me for Harvard’s master’s program, so it all worked together.”

They are proud to be Bennett Belles, but both want to see their alma mater return to its glory days. After all, not every institution invests in its students the way Bennett does, they say.

“I like that Bennett was a place where it was easy to make friends and that my friends felt more like family,” White said. “I liked that my advisors were incredibly supportive of me. One of them, Yvonne Welbon, even showed up at my Harvard graduation.”

Added Satish: “I think sometimes people don’t understand that Bennett College does so much more for young women than Harvard ever could. For example, the way people interact with each other, the sense of bonding and togetherness and the sense of self-worth that you get as a Bennett student. Harvard is preparing me to open a high-performing network of schools, but I would not have had the opportunity had it not been for Bennett College.”