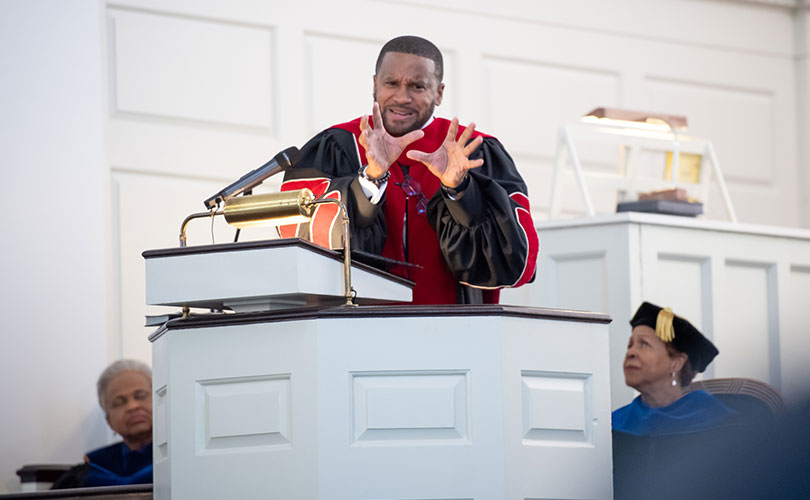 The Rev. Dr. Howard-John Wesley, pastor of Alfred Street Baptist Church in Alexandria, Virginia, delivered a fiery and inspiring Baccalaureate address inside the Annie Merner Pfeiffer Chapel at Bennett College on May 3.

Alfred Street donated $50,000 to the ‘Stand With Bennett’ Campaign, making it the largest faith-based donation the Institution received. During his address, Wesley encouraged the graduates to remember from whom their blessings come.

Wesley said it would be sad for the graduates to mistakenly think they earned their degrees by themselves.

After his address, Wesley was given a gift from children at the Martin Dixon Intergeneration Center, named after Bennett College alumna Dr. Joyce Martin Dixon ’56, and The President’s Award from Bennett College President Dr. Phyllis Worthy Dawkins and Bennett Board of Trustees Chair Dr. Gladys A. Robinson ’71, a North Carolina state senator.

During the ceremony, High Point University President Dr. Nido Qubein was bestowed an Honorary Doctor of Humane Letters. On Feb. 1 under Qubein’s leadership, HPU donated $1 million to the StandWithBennett Campaign. A few days later on Feb. 4, Qubein attended a press conference inside the Chapel and gave the College another $357,000 in checks from HPU students and various boards and organizations with which he is affiliated.

The Bennett College Choir, under the direction of Dorthea L. Taylor ’99, provided music during Baccalaureate. Among those in attendance were Dr. Kwanza Jones and her husband, José  E. Feliciano. Jones and Feliciano donated $1 million to the StandWithBennett Campaign in February, and Jones delivered Bennett’s Commencement address, at which time she was given an Honorary Doctor of Humane Letters.

Bennett graduate Qaleelah Smith is winner of trip to L.A. to participate in SUPERCHARGED® Summit by Kwanza Jones