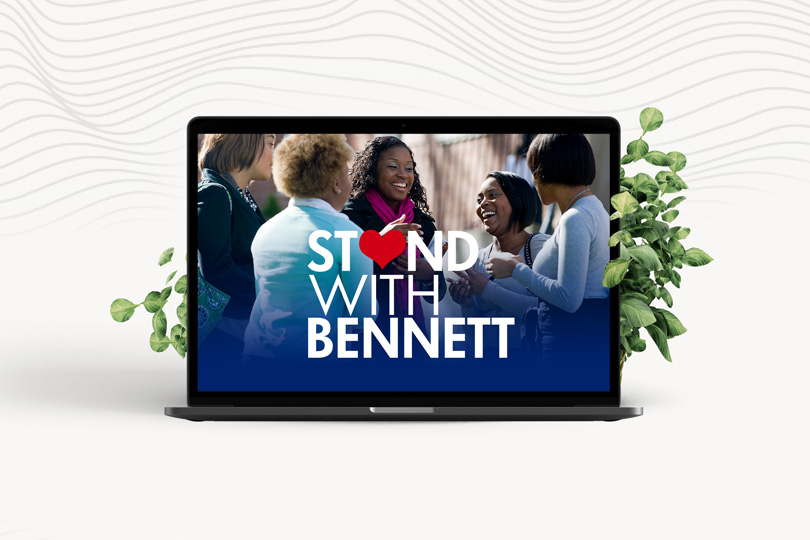 Bennett College’s online team — consisting of Webmaster Aziz Peregrino-Brimah and Technology and Digital Engagement Specialist Shaakira Jones — played a pivotal role in amplifying the school’s voice and raising awareness of Bennett College around the world during the #StandWithBennett campaign. Now that the focused energy of that campaign has subsided, Peregrino-Brimah and Jones are looking for new ways to engage the school’s supporters, share the message of Bennett College and serve as mentors to the current Belles.

Peregrino-Brimah describes the two-month #StandWithBennett campaign as “very fast-paced, all hands on deck.” Within days of the fundraising campaign being launched, the hashtag had gone viral around the nation and the world, boosted in large part by the logo he designed and now famous navy shirts, which being proudly worn – and shared on social media – by a variety of celebrities.

“Seeing those celebrities wearing the shirts in support of the College was great,” he said. “It really helped us get the message out and helped the campaign get some traction.”

Once the campaign launched, Peregrino-Brimah updated the website almost daily, adding a running total of the amount of money that had been raised and a tickertape listing donors. An online store was also created to sell the t-shirts, proceeds from which raised almost $70,000 for the campaign.

Meanwhile Jones, who graduated from Bennett College with a bachelor’s degree in computer science in 2011, attended every event related to the campaign to take photos for social media to maintain the excitement and keep momentum growing. She also worked with the Student Government Association to find ways to engage students at other schools in the campaign.

While the frantic activity of the #StandWithBennett campaign has ended, Peregrino-Brimah and Jones continue find ways for Bennett College to engage with the individuals and organizations that care about the school.

Peregrino-Brimah, who owned his own web design company before joining Bennett College in May 2016, is hoping to redesign the school’s website during the 2019-20 academic year to give it an updated look and make it easier for students, alumnae and others to find key information. He is also working on a series of short videos to tell the unique story of Bennett College.

Jones is launching a social media ambassador program this fall, utilizing the creativity of Belles to help her promote the College across Facebook, Instagram and other platforms. She will also be offering a workshop to help students create or improve their LinkedIn profiles, knowing that these can be critical in a job search.

“I love being able to give back to these students anyway I can, especially working in a job and a field I love,” she said.