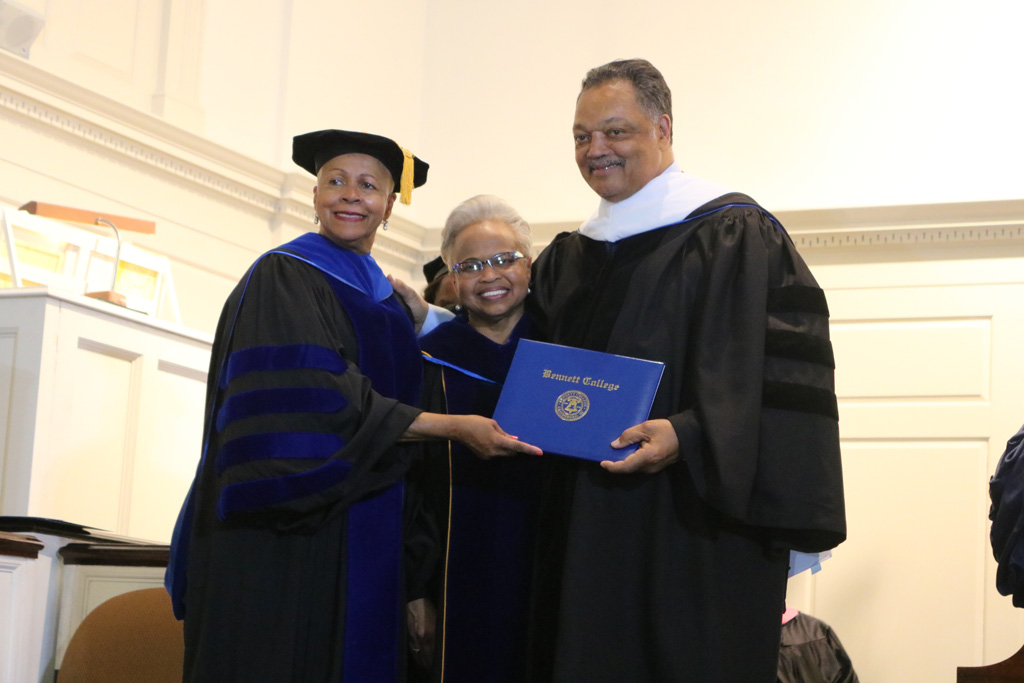 In an uplifting speech during which he referenced strong African-American women and had the graduates repeat after him, civil rights icon Reverend Jesse Louis Jackson, Sr. delivered Bennett College’s Baccalaureate address on May 4.

Jackson spoke inside a packed Annie Merner Pfeiffer Chapel, the same chapel where 60 years ago Dr. Martin Luther King, Jr. delivered a speech. Jackson was with King when he was shot on April 4, 1968, at the Lorraine Motel in Memphis, Tennessee.

Bennett President Dr. Phyllis Worthy Dawkins presided over the Baccalaureate Service, which featured music from the Bennett College Choir, directed by Dorthea L. Taylor ’99. Many were brought to their feet after the choir, led by graduating senior Danielle Jeffries, performed a rousing rendition of “When the Saints Go to Worship.”

While referencing historical figures, Jackson said the phrase, “strong women keep coming,” several times throughout his speech. Among the women he mentioned were Rosa Parks, Coretta Scott King and Winnie Mandela. He also lauded Linda Brown, the then-9-year-old Kansas girl whose U.S. Supreme Court case overturned school segregation, as well as the mother of Moses, who saved her infant son from being killed by Pharaoh and later managed to secretly care for him without Pharaoh knowing.

Player invited King to speak at Bennett in 1958. Likewise, she encouraged Bennett students to participate in the Civil Rights Movement as long as it didn’t interfere with their education. Jackson noted Bennett’s involvement, saying Belles played a critical role in the sit-in movement and should be featured alongside the statue commemorating the “A&T Four.”

Jackson told the graduates they must register to vote – and vote. He also told them not to forget about Bennett and to contribute to it financially. Moreover, in a message about which he seemed impassioned, he encouraged them to continue their education beyond the undergraduate level.

“You are not the tomorrow leaders. You are the right now leaders,” Jackson said. “You must love right now. You must go to graduate school right now.”

Former Bennett College President Dr. Julianne Malveaux introduced Jackson. After the address, Dawkins and Bennett Board of Trustees Chair Dr. Gladys Ashe Robinson ’71 bestowed an Honorary Doctor of Humane Letters upon Jackson, who joked about trying to get into Bennett decades ago but being refused by Player.

Among those at the Baccalaureate Service were former Bennett presidents Dr. Esther Terry ‘61, the only alumna to serve as president, and Dr. Gloria Randle Scott.