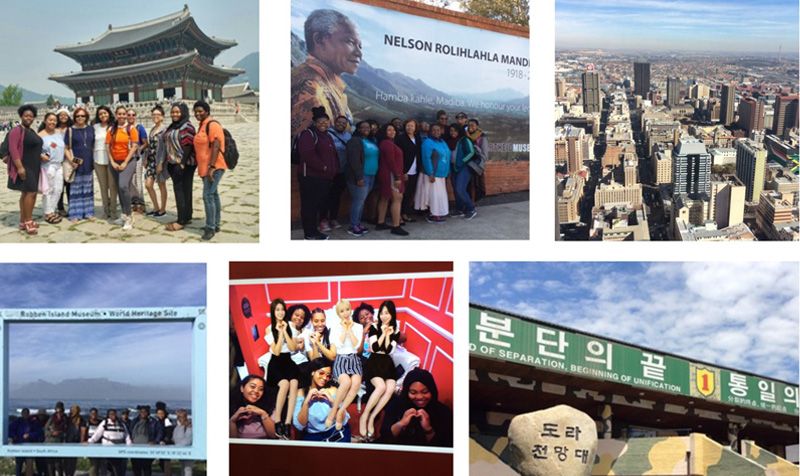 Join the Center for Global Studies at 11 a.m. on Thursday, November 2, in the Annie Merner Pfeiffer Chapel for A.C.E.S. During the program, we will learn about the international and cultural experiences of our Global Belles and Foreign Language Teaching Assistants!

Sophia Seabrooks, a junior Journalism and Media Studies major from Laurel, Maryland, traveled to Seoul, South Korea, in the summer of 2017 as a participant of the 2017 Mellon Initiative. Sophia is managing editor of Belle Magazine and of the publication produced by Alpha Lamda Delta Honor society. She loves writing short stories, enjoys traveling and previously studied abroad with the People Student Ambassador Program in Linz, Austria. While in Austria, Sophia visited other European countries, including France, Italy, Germany and Switzerland. Visiting every continent is among her goals. After graduation, she hopes to realize her dream of becoming a magazine editor and writer of short stories. Sophia embodies the diversity of Bennett: Her mother is a U.S. citizen, and her father is from the Philippines. She enjoys Filipino cuisine, and her favorite foods are, Lumpia, which is like a Filipino egg roll and Pansit, which is noodle stir fry. Sabrina Simpson, a junior Elementary Education major, with a minor in Global Studies, spent the spring 2017 semester in Tanzania. “I knew I wanted to travel to a Kiswahili-speaking country when my professor began showing us photographs of her home. I lived in Tanzania for four months, and I loved it! Being there exposed me to the deeply rooted community and improved my Swahili a lot! I learned to be more adventurous in life and adaptable to all unique situations.” Chelsea Tubbs, a graduating senior from the south side of Chicago, Illinois, spent the spring 2017 semester in Nicosia, Cyprus. A business administration major who is minoring in entrepreneurship with a concentration in management, Chelsea has two younger sisters, Monica and Shameria. She attended John Hope College Preparatory, where she participated in every sport from track to cheerleading and also participated in community service almost every week because she enjoys giving time to others. Chelsea was in the Top 10 (number 8) and graduated with a 4.1 GPA. She was accepted into every college to which she applied. Since arriving at Bennett, she has been an active participant in many organizations and clubs on campus. She has received many awards and recognitions, including making the Dean’s List and earning mental health awareness first aid certificates. “I’ve been granted many opportunities and have had the distinct pleasure of traveling to five different countries; where I have conducted research and studied one semester abroad. I am currently working towards graduation in the spring and still taking advantage of the blessed opportunities that God continues to present to me”. Waynisha Gaston, a business administration major from Los Angeles, Calif., traveled to Johannesburg and Cape Town, South Africa, during the summer of 2017 as a participant of the 2017 Mellon Initiative. Her activities for the 2017-2018 academic year include carrying out her term as Miss NAACP of Bennett College, serving as an Orientation Leader, being a member of the Social Work Club and President of the Christian Student Leader Fellowship. Waynisha aims to impact the college community by challenging the minds of her peers to think globally while adding cultural learning opportunities to the local community. “I have traveled across the United States and internationally to South Africa and Mexico. I believe that to break down cultural barriers and stigmas, you must educate and inform others. I challenge my college campus to look beyond what is easy service. It is convenient to donate funds, but it is equally if not more impactful to give back time”.

Ms. Fan-Chia (Julia) Kuo is the Chinese (Mandarin) Foreign Language Teaching Assistant. She graduated in 2005 with a B.A. in Japanese Language and Literature from National Taiwan University and then went on to earn her Master of Arts in Japanese Applied Linguistics at Waseda University in Shinjuku, Tokyo. Ms. Kuo has an impressive academic background, a pleasant personality and is a great language teacher. After finishing her bachelor’s degree, she taught Japanese for two years in Taiwan and taught Chinese part-time for five years while she was a student in Japan. Her students find her to be an effective and engaging teacher.

Ms. Verena Yousseff Lotfy Bassily is the Arabic Foreign Language Teaching Assistant. She graduated in 2008 with a B.A in Translation from The French University in Egypt. She is flexible, friendly, kind and patient. She is fluent in English, Arabic and French. Her language skills, previous teaching experience and persistence to reach her career goals by doing her best make her an effective and engaging teacher. She is keen to share her Egyptian culture and Arabic language with Bennett College students. Peggy Sayo is the Kiswahili Foreign Language Teaching Assistant. She graduated in 2011 with a degree in education from the Moi University in Kenya. Her primary inspiration to become a teacher was her mother, who also was her first English teacher. Ms. Sayo’s mother made teaching English look so easy, which made her decide teaching was what she wanted to do. Here at Bennett College, miles away from home, she is proud to walk in her mother’s shoes and teach Swahili. “The Foreign Language Teaching Assistant program provides an opportunity to contribute and find solutions to international concerns, particularly in the sub-Sahara region. There is a lot that I would be able to share during my FLTA program at Bennett College. Being a cultural ambassador means representing my country with its rich culture, and immersing in the U.S. culture”.