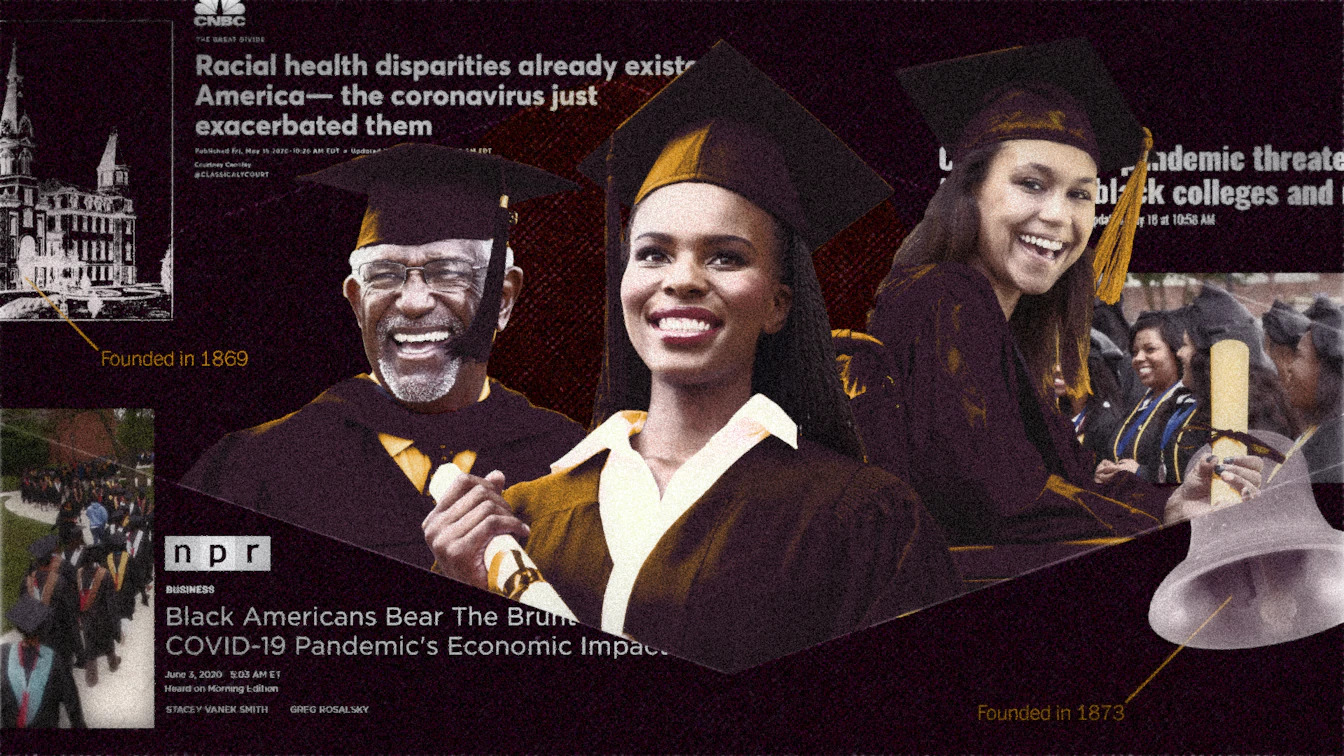 On the first day that college applications opened last August, Daja Snipes applied to Clemson University. The big South Carolina public university had been her first choice for months. She was big on school pride and sports at the time, and she fell in love with the campus when she visited.

She did apply to another school: North Carolina Agricultural and Technical State University, a historically black university about an hour from home. But it was her “fallback,” she said. “It was last on my list.”

As her senior year went on, though, Snipes kept hearing from the staff and students at N.C. A&T. She began to waver. And then the Black Lives Matter protests began.

“They were treating me like I was family, and I wasn’t even a part of their family yet,” Snipes said. “And the protests happening definitely makes me want to go to not only attend A&T but an HBCU even more.”

When campuses shuttered in March, HBCUs faced all the challenges predominantly white schools did — and then some. “When other institutions catch a cold, HBCUs catch a flu,” the president of Claflin University, Dwaun J. Warmack, said.

At Bennett College, the private women’s HBCU in Greensboro, N.C., three staff members spent a weekend traversing the area in search of hand sanitizer for their 267 students. Delaware State University, a public HBCU in Dover, Del., housed 200 students even after shutting down, said university President Tony Allen. Otherwise, he said, a lot of students “would effectively be homeless.” Through a combination of federal funding and private donations, the school raised enough money to equip students with laptops and WiFi hotspots to complete the semester.

And those were just the challenges of spring. Many HBCU presidents told The Washington Post that with the virus hitting African Americans especially hard, fall enrollment was expected to decline.

But the enduring protests of police violence and institutional racism could offer a boost to HBCUs, according to university officials and economists, swaying black and other students of color to choose schools where they feel protected and a sense of belonging.

“HBCUs have an important tradition and history of helping black students to be successful to weather any storm,” Bennett College President Suzanne Walsh said. “We help our students while they’re on campus learn how to be successful, how to navigate a volatile, uncertain, complex and ambiguous world in a safe place.”

Almost 300,000 students attend the 101 HBCUs across the country. During times of racial tensions, there’s an increase in minorities enrolling in minority-predominant colleges, economists say. More students in California chose HBCUs in the wake of Proposition 209 in 1996, which led to the ban on the use of racial preferences in admissions at the University of California system.

“One of the things that HBCUs saw was that there was an uptick in the number of black students who were applying and attending because they did not feel welcome at majority [white] institutions,” said Rhonda V. Sharpe, founder of the Women’s Institute for Science, Equity and Race.

Something similar happened in the fall of 2016, after University of Missouri students protested for weeks over racism on campus. Freshman enrollment jumped 49 percent at Shaw University, 39 percent at South Carolina State and 32 percent at Tuskegee University. Mizzou, meanwhile, saw a 40 percent reduction in African American student enrollment that year.

In the wake of the protests sparked by the police killing of George Floyd, something similar appears to be happening.

Some of the nation’s top black high school athletes are saying they are committing to attend HBCUs, despite being recruited from leading programs. Five-star center Makur Maker gave up scholarship offers at UCLA and Kentucky to play at Howard University. The No. 16-ranked player wrote on Twitter: “I need to make the HBCU movement real so that others will follow.” Norfolk State men’s basketball coach Robert Jones has received messages from high-level recruits who “are looking for a family-like campus where they can relate to more students, professors and coaches.” In June, he landed Nate Tabor, a Connecticut high schooler who had Power Five scholarship offers.

For top recruits, renewed focus on social issues has changed conversations and commitments

Hawa Barrie, a rising college freshman from Tennessee, was set on attending an HBCU since the beginning of her freshman year in high school. But she says the recent protests make her even more rooted in her decision. Attending Virginia’s Hampton University means “being educated to help me be the activist I fully want to be,” said Barrie, who’s originally from Sierra Leone. “Going out into the real world, I need an armor out there and get prepared on what the world might have for me.”

She added: “I don’t want to just go out there and speak because I’m angry or because I see everyone else speaking about it. When I go out there, I want to make sure that what I say are 100 percent facts. Being at an HBCU, I can fully learn about myself and about my culture and the history about things that aren’t really being taught in public schools.”

The pandemic, of course, may still make college a challenge for some families. But leaders at HBCUs say social distancing has also been a kind of blessing, providing new ways to recruit students.

At Dillard University, in New Orleans, future students can meet virtually with heads of departments for breakout sessions and get taken on a real-life virtual campus tour. Kristen Broady, dean of the College of Business, said she gives students her cellphone number in case they have any questions.

Warmack, the president at Claflin, said his weekly Zoom meetings with accepted students and their parents — called “Ask the Prez” — have been a hit. “We end up being on a call for about an hour and a half with students from as close as Bamberg, S.C., to Jamaica, the Virgin Islands and as far as Nigeria,” he said.

The school’s enrollment numbers have been trending ahead of last year. Enrollment is up at Winston-Salem State University, in North Carolina, too, officials there said.

“The whole thing just made me even more grateful that I chose an HBCU,” the declared criminal justice major said. “I feel like I would be robbing myself if I choose a PWI [predominantly white institution] to attend school.”

Snipes’s new school, N.C. A&T, will hold classes on campus and online this upcoming semester. She recently met up with her future roommate at a mall in Raleigh, and they’ve picked out some items for their pink, gray and white color scheme for their dorm room.

The original news story can be found on washingtonpost.com.