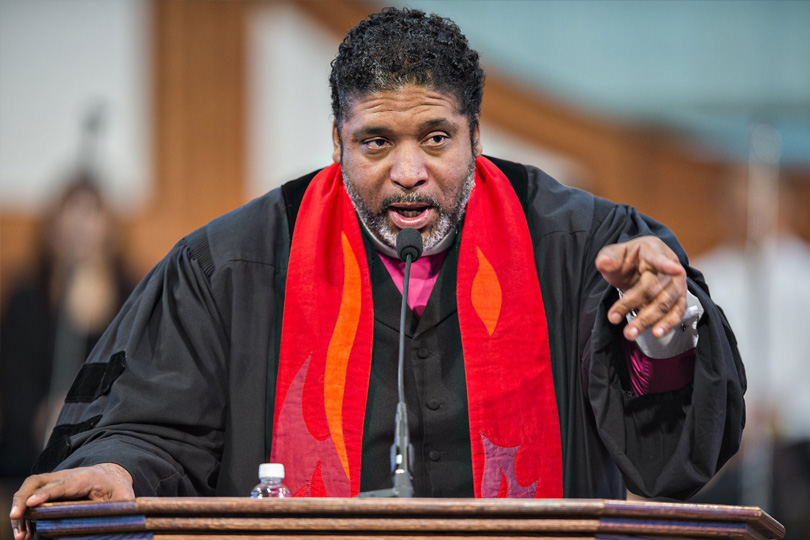 GREENSBORO, N.C. – Former State NAACP President the Reverend Dr. William J. Barber, II and his daughter, Dr. Sharrelle Barber, will discuss the Institution’s pivotal role in the civil rights movement, among other topics, on Jan. 26 at 2 p.m. inside the Global Learning Center on Bennett’s campus.

The event will be moderated by WFMY Channel 2 anchor/reporter Taheshah Moise and will feature the Bennett College Choir Ambassador Ensemble. There is no admission charge; however donations will be accepted and will go toward the Stand With Bennett fundraising campaign.

Barber was president of North Carolina’s chapter of the National Association for the Advancement of Colored People for more than a decade before stepping down in 2017. He is a member of the NAACP’s national board and architect of the “Forward Together Moral Movement” which began in 2013 in North Carolina’s state capital. He is currently President and Senior Lecturer of Repairers of the Breach and Co-Chair of the Poor People’s Campaign: A National Call for Moral Revival.

Barber has served as pastor of Greenleaf Christian Church (Disciples of Christ) in Goldsboro, North Carolina, since 1993. He earned his bachelor’s degree in political science from North Carolina Central University, where he served as Student Government Association President. He earned his Master of Divinity from Duke University and his Doctor of Divinity from Drew University with a concentration in public policy and pastoral care.

In 2016, Barber delivered a rousing, well-received speech at the Democratic National Convention in Philadelphia. In 2018, he was named Tar Heel of the Year by the News & Observer.

Sharrelle Barber earned her bachelor’s degree in biology from Bennett College in 2007 and served as Student Government Association president during her senior year. She has a Master of Public Health from the University of North Carolina at Chapel Hill’s Gillings School of Global Public Health and a Doctor of Science in Social Epidemiology from the Harvard T.H. Chan School of Public Health.

Currently, she is a faculty member at the Drexel University Dornsife School of Public Health in The Department of Epidemiology and Biostatistics in Philadelphia. In 2018, she partnered with Free Southern Media, an independent film collective based in Durham, North Carolina, to co-direct and co-produce a short documentary titled “I, A Black Woman, Resist.” The documentary honors the life and legacy of Marielle Franco, an Afro-Brazilian politician, feminist, human rights activist and member of the Rio de Janeiro city council. Franco was assassinated in March 2018.

Saturday’s event is titled “Sisters for Justice Series: A Conversation with Rev. Dr. William Barber and Dr. Sharrelle Barber.” The event will feature a Q&A and will be followed by a reception.

WATCH: Bennett College and Spelman College are "United In Sisterhood"