Home News The New York Times features Bennett in ‘What Does Community Mean to Black Americans?’ 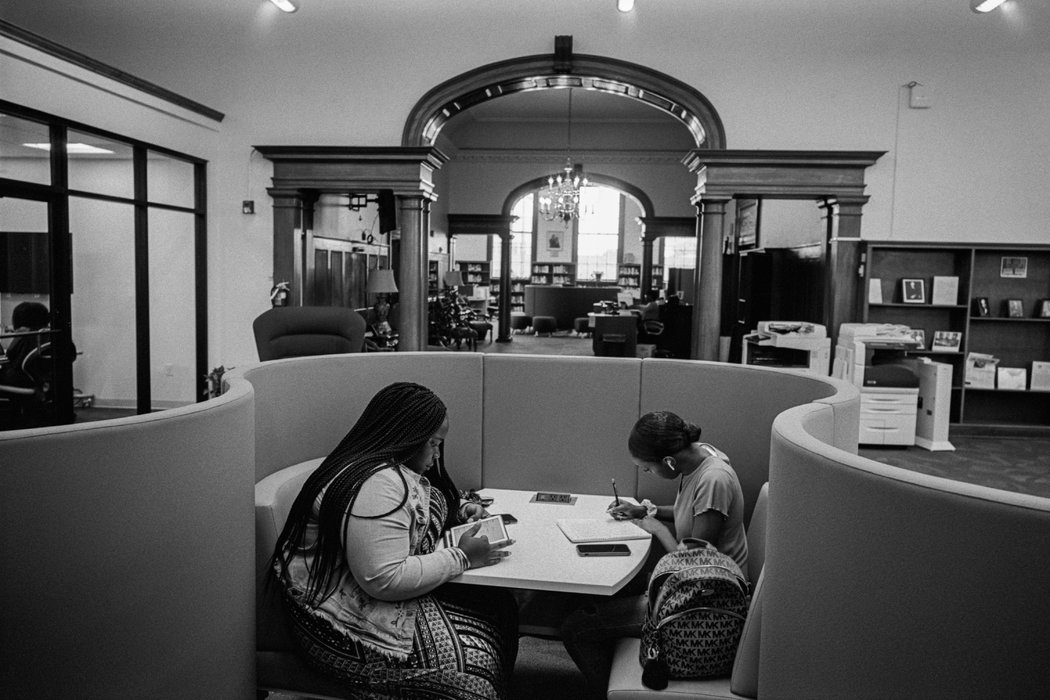 This summer, four photographers and four writers for The New York Times drove around the United States. Each pair was guided by a unique theme – patriotism, tradition, community, youth – and a unifying questions: What does America look like now? Bennett College in Greensboro, NC was one of their visits of choice as they drove from Maryland to South Carolina. Here’s a portion of that story.

Setting foot on Bennett College’s campus, one might first notice the immaculately manicured grass that stretches in front of all the old brick buildings.

The women at Bennett don’t walk on the grass. They stick to the concrete paths that make a grid around the Greensboro, N.C., campus. It’s so they don’t get used to taking shortcuts, says Ebony Duell, a journalism student entering her senior year.

Bennett began as a school for freed slaves. In 1873, a man named Matthew Austin placed an ad in the Greensboro paper, calling for black people to meet about the establishment of a school. The people came, so the school was established.

Five years later, Lyman Bennett, a businessman living in Troy, N.Y., who’d made his money as a manufacturer of high quality collars, got word of the upstart college in Greensboro, and went to visit it. He donated $10,000, which allowed the school to purchase land and erect its first building. Shortly after his donation, Bennett died of pneumonia, the school carrying his legacy and his name.

All of this is told to me by Mary Anne Scarlett. She is 87 years old and wears a hat with a brim wide enough to cradle all of the sunlight that might otherwise spill onto her face. She has been a fixture of Bennett’s campus since 1929, when she was 9 months old and her father was hired as the first superintendent of buildings and grounds.

It’s somewhat unclear what her role is now. (“I do a PowerPoint,” she says, for new student orientation. “Though I have to change it from time to time.”)

The current state of Bennett College is dire. The Southern Association of Colleges and Schools placed Bennett on probation in 2016. In December of 2018, S.A.C.S. voted to withdraw Bennett’s accreditation, based on its declining enrollment (about 300 students, compared to 700 in 2010) and consistent financial hardship.

When the news of the college’s fight to stay accredited broke, a fund-raising effort took off; through local donations and a wide-reaching social media campaign, the school raised $8.2 million, exceeding its $5 million goal. Bennett then filed a lawsuit against S.A.C.S.; a judge allowed its accreditation to stay in place while the legal proceedings play out.

Bennett has a new president, Suzanne Walsh, who is tasked with seeing the college through this latest difficult stretch. She is traveling today; Gwendolyn Sneed O’Neal, who served as interim president, joins us in her place. She is now the chief operating officer at the university. She points out that the struggles of Bennett, in some ways, are rooted in its history, and the place it started from. “May I remind you, women weren’t generally being educated when Bennett started, not to mention black women,” she says. “When we were coming out of Jim Crow, moving into a period of desegregation, Bennett knew that we had to produce women leaders. What they were instilling in us, as ladies, as Bennett women, was that something that said there are boundaries here, you owned my parents and my grandparents, but you can’t own me. We are ladies. At minimum, we had to be bicultural, at that time. We had to know how to negotiate a segregated society, and we had to know how to do it with grace, dignity, authority, but also expertise.”

In the ’70s, when predominantly white institutions, or PW.I.s, began integrating, they took only “the cream of the crop,” Dr. Scarlett says, and gave them full scholarships. By the end of that decade, enrollment had dipped at historically black colleges and universities, including at Bennett; the resources P.W.I.s could offer, in comparison, were hard to pass up.

Now Bennett’s student body is mostly made up of what Dr. O’Neal calls “emerging scholars” — people who struggled academically in high school and could use a fresh start. Ninety-eight percent of them are on financial aid to cover its $28,000-per-year tuition costs. Many of Bennett’s students and alumnae have been the first in their family to go to college. The college can’t afford to lose any of them.

For Dr. O’Neal and Dr. Scarlett, closing Bennett isn’t on the table. The college has had its feet to the fire before. But the bonds are too strong. Dr. Scarlett still talks to her old college roommate, after 65 years. Women still pack the perfectly manicured lawns of Bennett during anniversaries or commencement events. As the Bennett motto goes: “Education for the future, sisterhood for life.”

President Trump Did Not Speak, Receive Award at Bennett College