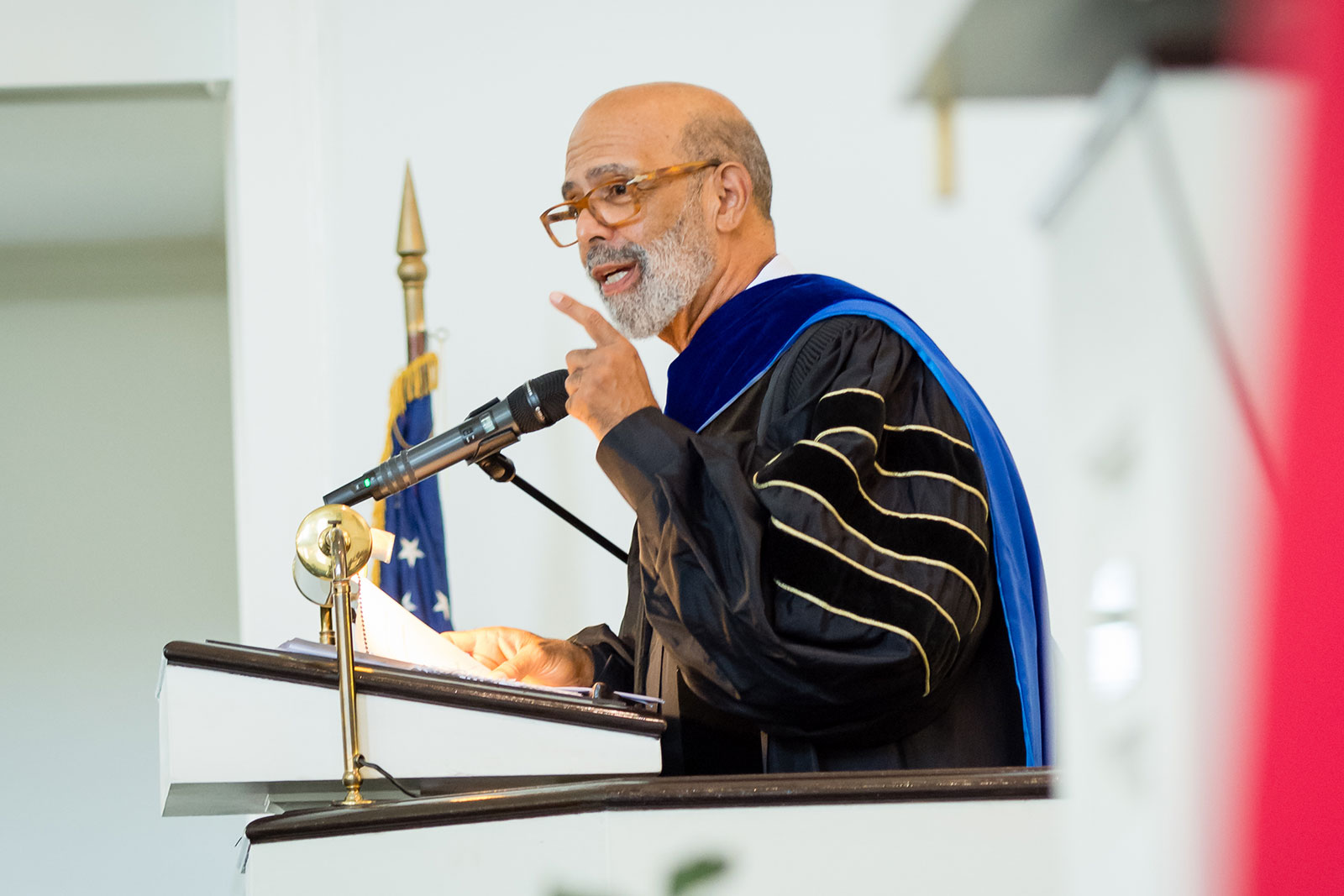 During Bennett College’s 145th Founder’s Day Convocation on Sept. 30, UNCF President/CEO Dr. Michael L. Lomax said people should stop questioning the relevancy of HBCUs and instead celebrate them for their contributions to the fabric of American higher education.

Speaking in the Annie Merner Pfeiffer Chapel, Lomax proffered that people who question the need for HBCUs are actually questioning the need for diversity.

“In 2018, black women are among the most educated set of people in the country,” he said. “Equality and education are linked. During the civil rights movement, Bennett’s role then and now is leader. When no other school in this area would allow Dr. King to speak, guess where he spoke? Bennett College. Ladies, you stand on the shoulders of Bennett giants like Dr. Willa B. Player. She was a giant not just because of her impressive credentials and progressive leadership, but also because of her forward thinking.”

Player was the first African-American woman to lead a four-year, accredited institution, serving as Bennett’s president from 1955 to 1966.

Lomax, Murray, Budd and Adams were instrumental in convincing Congress to pass legislation earlier this year – as part of the $1.3 trillion Omnibus Spending Bill – that will enable HBCUs to receive deferments on loan payments to the HBCU Capital Finance Loan Program. Requesting deferments from the U.S. Department of Education was the brainchild of Bennett College President Dr. Phyllis Worthy Dawkins, who went to the nation’s capital in January seeking Lomax’s help.

“When Dr. Dawkins came to me, she admitted she had a problem,” Lomax recalled in his address. “She said she needed to grow enrollment and get Bennett in line with the accrediting body. She reached out for help from others, and that is such a sign of leadership. When you have the humility and the wisdom to recognize that a team can get more done than an individual … that is good leadership.

“She went to Capitol Hill because the problem could not be solved alone in Greensboro or through reaching out to Belles,” Lomax continued, alluding to the more than $2 million Bennett alumnae donated in gifts and pledges during FY 2017-2018. “She reached out to folks on both sides of the aisle. She reached out to bipartisan believers and for that all HBCUs owe her a debt of gratitude and, I believe, the nation does.”

Budd and Adams were the primary members of Congress who aided Dawkins in her deferment quest. Eight other Congressmen, including Bobby Scott (D-VA), also assisted. Bennett College was approved for a 6-year deferral, which will result in a financial benefit to the College of $8.9 million. During that period, the College plans to stabilize financially, invest in capital improvements and continue to grow enrollment.

“It is easier to build a coalition when you have members of Congress who recognize a jewel like Bennett College,” Lomax said. “Rep. Budd knew the history and leadership of this great institution in his district, and Rep. Adams came to Congress and did what no one else has ever done. She made HBCUs her signature issue. She moves the needle on HBCUs like no one else ever has.”

In reference to a phrase Adams coined during the 40 years she taught art at Bennett, Lomax exclaimed, “Bennett Belles are voting Belles.”

He praised Belles for also knowing how to get votes. “Not only have you helped Bennett with her finances; you’ve given it heavy capital in self-confidence and the belief this institution has in itself,” he said. “Together, across the aisle, you put Bennett on a solid foundation.”

Lomax also challenged the city of Greensboro as well as area corporations and foundations. “If you want to invest in a growing enterprise with a proven product, invest in Bennett College.”

Founder’s Day was especially celebratory this year because, for the first time in three years, Bennett ended the fiscal year with a surplus. However, that’s not the only good news. Enrollment is up, with 240 new students – including seven transfer students and two international students – admitted in the fall. Comparatively, last fall the College had 178 new students.

Of this year’s 243 new students, 33 have GPAs of 4.0 or higher, and the average GPA of the freshwoman class is 3.2. Retention is also up. Moreover, Bennett completed the FY 2017-2018 Financial Statements and Uniform Guidance Financial and Compliance audits with no material findings – no easy feat.

“We are on the upswing at Bennett, and I have the Bennett Board of Trustees, alumnae, my leadership team, faculty, staff, students and friends of the College to thank for that,” Dawkins said in an interview. “While we have more work to do, I am proud of the way Bennett College has fought valiantly to try to weather the storm we’ve been under for the past few years. I am confident that Bennett will continue serving as a beacon of hope for young women of color for generations to come.”

During a brunch reception, Adams echoed Lomax’s sentiment about being tired of people questioning the relevancy of HBCUs and thanked Budd for his efforts in making the deferment a reality. Education shouldn’t be a partisan issue, she said.

“I started my initiative on HBCUs for three reasons,” Adams explained. “To create an understanding of HBCUs and their economic impact, to educate members of Congress and their staff about HBCUs and to pull together some bipartisan legislation for HBCUs.”

Budd said HBCUs serve over 300,000 students annually, while describing them as an engine that grows the economy.

“Bennett is part of the pipeline for making the county great,” Budd said. “Enrollment is back up here, and now you have more runway so you can lift off and do amazing things.”

Murray, who emceed the reception, said Dawkins should be praised for her efforts. Dawkins, in turn, praised Murray, Lomax, Budd and Adams for their faith in Bennett and for helping her navigate Congress and bring the deferment to fruition.

The reception ended with remarks from Bennett College Board of Trustees Chair Dr. Gladys Ashe Robinson, an N.C. state senator and 1971 Bennett graduate.

“On behalf of the Board of Trustees, we certainly want to thank Dr. Dawkins first for having the idea,” Robinson said. “We thank her for that vision and for moving forward on that vision. We are deeply indebted to her…”