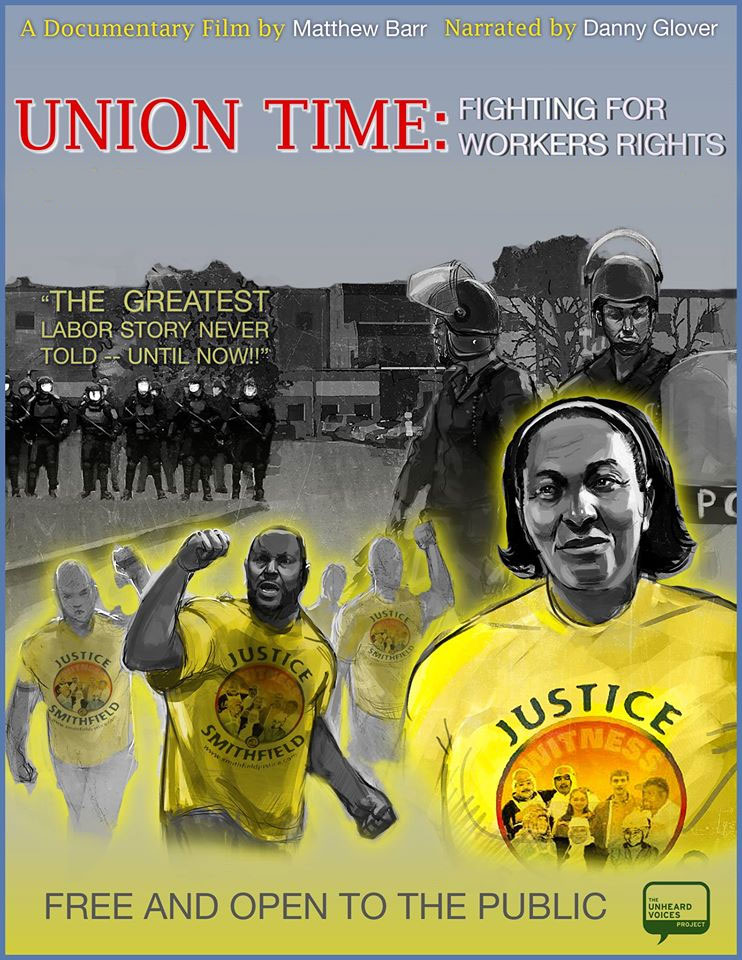 The UNCG Department of Media Studies is pleased to announce that the documentary “Union Time: Fighting for Workers’ Rights” will be screened at the 2017 Black History Media Festival, an event hosted by Bennett College. The theme this year is “The Spirit of Social Justice”.

“Union Time” was produced and directed by Matthew Barr, Professor in UNCG’s Media Studies Department. The film tells the story of one of the greatest union victories of the 21st century—the fight to organize Smithfield Foods’ pork processing plant in Tar Heel, North Carolina. From 1993 to 2008, workers struggled against dangerous working conditions, intimidation, and low pay. They were organized by the United Food and Commercial Workers Union, whose Justice@Smithfield campaign brought national attention to the struggle.  Also involved in the campaign were the North Carolina NAACP, led by Reverend William T. Barber, and the Beloved Community Center of Greensboro, with leadership from Reverend Nelson Johnson. The victory led to the formation of UFCW Local 1208 and fair working conditions for 5,000 workers.

“Union Time” premiered at UNCG on April 28, 2016, and has been screened at the DC Laborfest. In addition, the film is scheduled to be shown at Cornell University’s School of Industrial and Labor Relations, the UCLA Labor Center, and the Oral History Association, among others.

Assistant Professor Tom Lipscomb of Bennett College’s Department of Journalism and Media Studies is the moderator of the event. (Prof. Lipscomb graduated in 2003 from UNCG’s MFA Program in Film and Video Production.)

DATE: Friday, February 24, 2017 at 7 PM at the Global Learning Center Lecture Hall, Bennett College. It is free and open to the public.