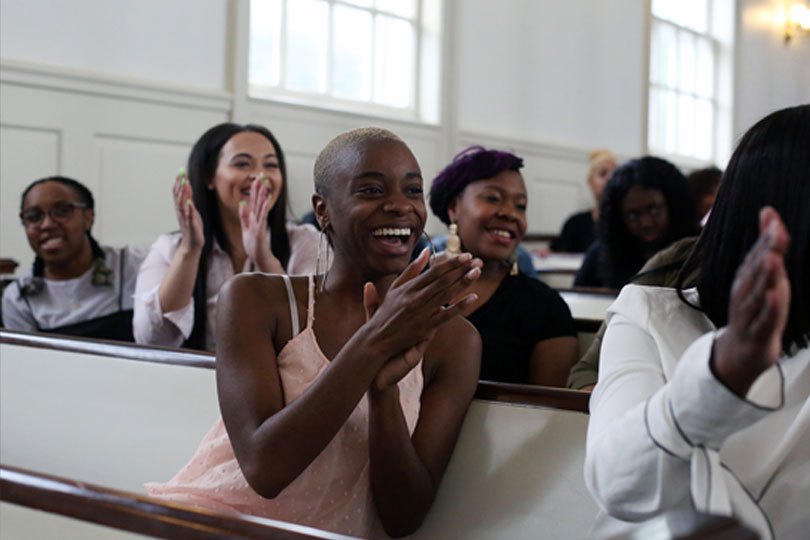 More than 2,000 students from colleges and universities across the country applied for Michigan State University’s Summer Research Opportunities Program, which ended on July 27.

Bennett senior Abigail Mosley was among the fortunate ones who got accepted.

“The Summer Research Opportunities Program is a prestigious program at Michigan State University, and this summer we had a cohort of 91 participants,” said Steven Thomas, Program Manager at The Graduate School at Michigan State. “The average GPA of the cohort was 3.5, and several cohort members have been on the Dean’s List and have studied overseas.”

Mosley learned about the internship opportunity from Dr. Gwendolyn M. Bookman, who heard about it from Dr. Valerie Ann Johnson.

“I had to submit an application and also a research statement of what I’d like to work on while I was there,” said Mosley, a senior political science major from Cleveland, Ohio. “I asked Dr. Bookman and Dr. V.J. to look over my application for me, and after I submitted it, Mr. Thomas reached out to me within a month and told me I’d been accepted.”

Mosley’s research statement discussed her desire to focus on the impact of community organizing on urban education reform. “Specifically, I wanted to look at certain school districts, though I ended up focusing only on Detroit because I was limited on time. I focused on the different strategies that were most effective in creating sustainable change in urban education settings.”

“The campus is beautiful and massive. It’s very different from Bennett,” she said. “It took a little bit of getting used to because it was so big, but we summer interns were on only one part of the campus, and they had us living on the same floor in Bryan Hall. I was working in the Political Science Department and was one of the few interns that actually didn’t have to go into the lab every single day to work on my project.”

Interns had deadlines by which they had to submit papers, abstracts, etc. Mosley said she met with her research mentor once a week to give her progress updates.

While Mosley was 10 hours away from Bennett College, Carmesha Blackmon was around the corner at N.C. A&T State University working as a tutor counselor for the Upward Bound Program. Her internship ran from June 16 to July 19.

“My duties were to ensure that the group of high school students under my care were safe, equipped for college and had a great experience with the Upward Bound Program,” said Blackmon, a sophomore Journalism and Media Studies major from The Gate City. “It was also my job to fulfill a role as a mentor to guide them in the right direction so that they can be successful in the near future.”