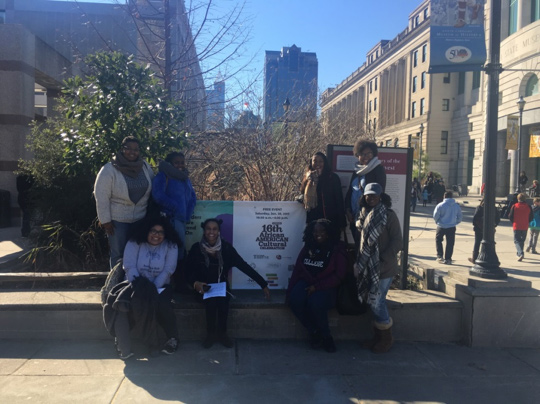 Titled “The Shoulders We Stand On,” the January 28 event featured more than 75 outstanding presenters, award-winning musicians, well-known authors, dancers and craftspeople who highlighted the contributions of African-Americans to North Carolina.

Governor Roy Cooper was on hand to give welcoming remarks to the audience. “This celebration comes during a time of transition, a time when discourse has often been divisive,” Cooper said. “But many in attendance said it’s in this political climate that such celebrations can truly shine.”

“All of the students expressed that they enjoyed the festival and learned a lot about North Carolina’s history,” she said. “Several students took pictures of various events at the festival and emailed them to their friends and parents.”

Carmen Acosta, a freshwoman math major who was born in the Dominican Republic but graduated from high school in Raleigh, said she spent a considerable amount of time at the craft tables, “Many of which had items with historical meanings, such as cowrie shells which stand for protection and peace in many African cultures.”

“The play was interesting,” Carmen said. “Even though I already knew a lot about most of the characters, including Harriet Tubman and Louis Armstrong, I still learned some things about them that I didn’t know. I’m glad I got the chance to attend The African American Cultural Celebration with some of my Bennett sisters because it was a great event, and I would definitely like to go again next year.”