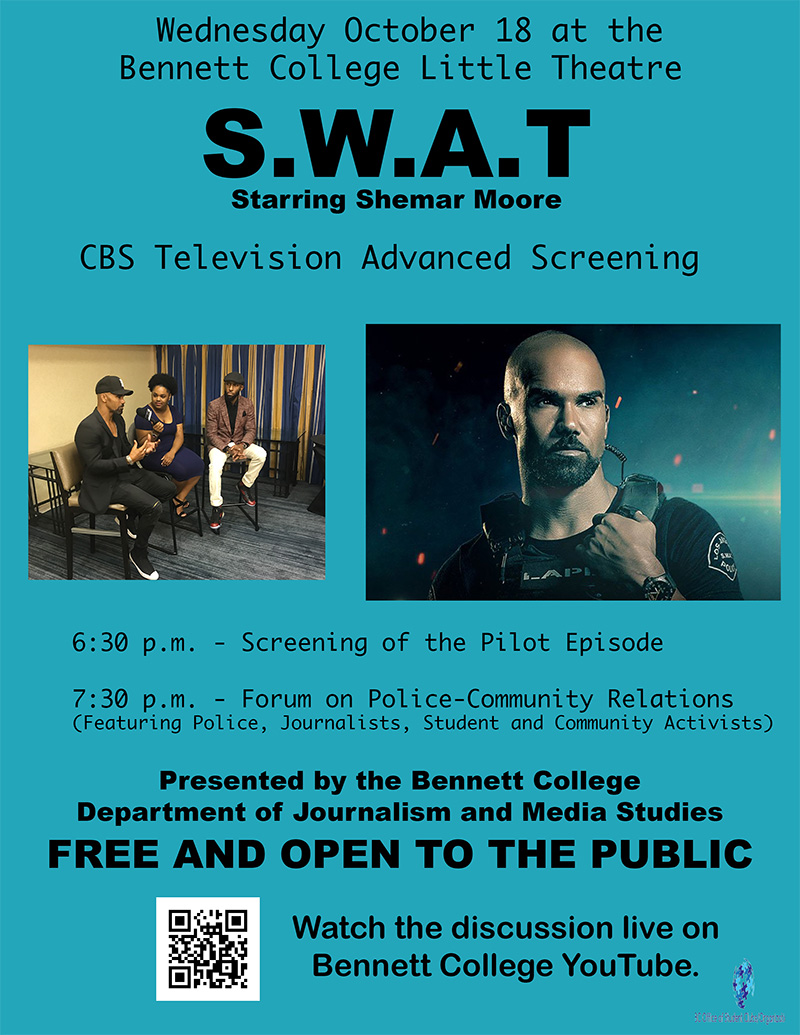 GREENSBORO, N.C. – A screening of the pilot episode of the new CBS series “S.W.A.T.” starring Shemar Moore will be shown in the Bennett College Little Theatre at 6:30 p.m. tonight.

The screening, being sponsored by Bennett’s Department of Journalism and Media Studies, is free and open to the public.

Immediately following the screening, there will be a forum on police-community relations featuring Officer E.Y. Watkins, a 17-year veteran of the Greensboro Police Department, Irving David Allen, a community organizer, Azuree Bateman, a senior journalism and media studies major at Bennett, Chanel Davis, a freelance journalist and president of Triad Association of Black Journalists, and Timothy Ramsey, a reporter and the sports editor for The Winston-Salem Chronicle.

“S.W.A.T.,” which premieres on Nov. 2, is a reimagined version of the 2003 movie “S.W.A.T.” starring Samuel L. Jackson, Colin Farrell and L.L. Cool J. Executive Producer Aaron Rashaan Thomas worked to infuse topical issues into the new action series starring Moore, famous for his roles as FBI agent Derek Morgan on the hit CBS show “Criminal Minds” and Malcolm Winters on the award-winning CBS daytime soap “The Young and the Restless.”

Tonight’s screening didn’t happen by accident. In August during the National Association of Black Journalists’ (NABJ) annual convention in New Orleans, Moore and Thomas were interviewed by Bateman as sophomore Ebony Duell, also a journalism and media studies major, videotaped.

Bateman and Duell were joined in New Orleans by JMS classmates Gloria Horton, DasJa Sanford and Janiyah Shelton. The students were accompanied by Tom Lipscomb, assistant professor of JMS, who arranged for tonight’s screening of “S.W.A.T.” as well as a screening last month of CBS’ new series “Wisdom of the Crowd” starring Jeremy Piven and Richard T. Jones.

“Shemar Moore couldn’t have been nicer to our students in New Orleans,” Lipscomb said. “He was gracious with his time, answering all of Azuree’s questions during the interview and even talking to her mom via Facetime afterward. While speaking to Azuree’s mom, he complimented

Azuree on her journalistic skills and preparedness.”

Lipscomb and several Bennett students have already screened the “S.W.A.T.” pilot episode that will be shown at Bennett tonight. He said he’s grateful Bennett can provide the opportunity for the public to get a sneak preview of the action-packed show without having to wait until November.

“As an institution of higher learning, Bennett College has an inherent duty to interact with the public in meaningful ways,” Lipscomb said. “Sponsoring a dialogue about community-police relations is one way the college can try to help serve as a catalyst for change. Tonight’s screening and subsequent forum are fully supported by Keonte Coleman, interim dean of professional studies, which encompasses journalism and media studies, and Tamara Jeffries, interim department chair of JMS. I truly hope Bennett’s students, faculty, staff, alumnae and many members of the public will join us tonight for what promises to be an engaging event.”

Journalism and media studies is one of the top majors at Bennett College. Rounding out the top five are biology, social work, psychology and business administration.

Join the "Change for Change" Walk for Cancer Awareness on Friday, October 20th