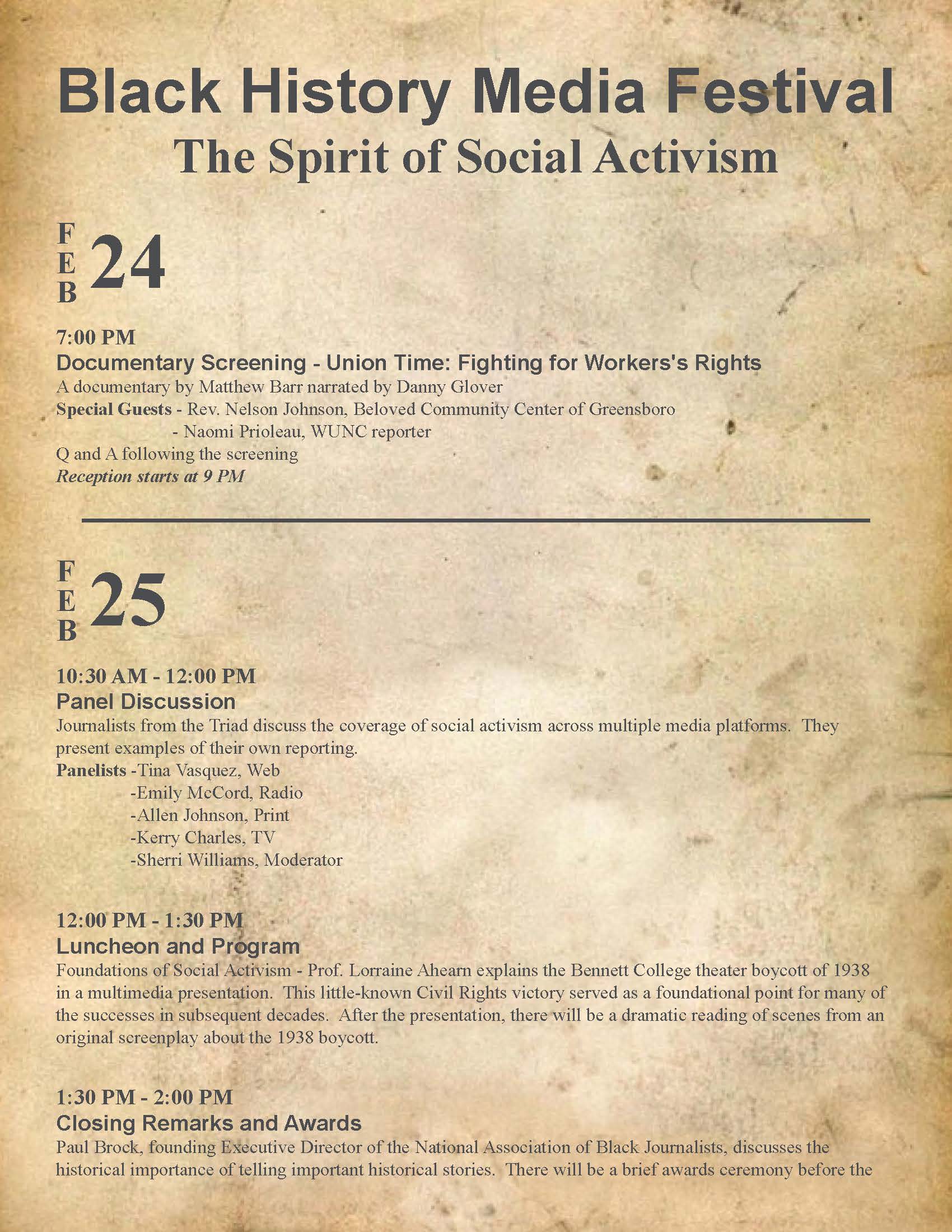 The events that led to the unionization of a Smithfield hog plant and past and present civil rights struggles will be discussed February 24-25 during “The Spirit of Social Activism,” a Black History Media Festival being hosted by Bennett College.

Sponsored by the Bennett College Department of Journalism and Media Studies, the two-day festival begins Friday and is free and open to the public. All events will be held in the Global Learning Center.

“We are excited about the Black History Media Festival because it allows us to share social activism stories with the public, including a little-known civil rights victory that originated at Bennett College,” said Tom Lipscomb, assistant professor of journalism and media studies. “The festival will also feature Triad-area journalists who will discuss the media’s role in coverage of social justice issues. As different groups fight for inclusion and rights in America today, I think it will be fascinating for attendees to learn that they are implementing some of the same tactics that were used by others as far back as the 1930s.”

The festival kicks off at 7 p.m. Friday with a documentary screening of “Union Time: Fighting for Workers’ Rights.” Written by Matthew Barr and narrated by Danny Glover, the documentary chronicles how workers at a hog plant in Smithfield fought to become unionized. Following the screening, the Rev. Nelson Johnson, executive director of Beloved Community Center of Greensboro, and WUNC reporter Naomi Prioleau will answer questions. A reception will follow the Q&A.

On Saturday, the festival continues with a panel discussion of Triad-area journalists, who will present examples of their reporting, from 10:30 a.m. to noon. Panelists are Kerry Charles of Fox 8 Morning News, Allen Johnson of the News & Record, Emily McCord of WFDD 88.5 FM, and Tina Vasquez of Rewire, a nonprofit, daily online publication.

After the panel discussion, Elon University communications instructor Lorraine Ahearn, a former longtime civil rights reporter for the News & Record, will discuss the successful 1938 Bennett College theater boycott. Ahearn’s multimedia presentation will be conducted during lunch, which will be provided for attendees.

The festival is expected to last until 2 p.m. on Saturday.

“Keonte Coleman, Tamara Jeffries, Bennett’s journalism and media studies students and I have worked hard to make this festival an annual event that draws people from throughout the Triad and North Carolina,” Lipscomb said. “We want this year’s festival to build on the success we enjoyed during last year’s, and we hope it will be well attended and heavily supported by area colleges, churches and community members.”

To attend the free festival, please use the following evites to register: