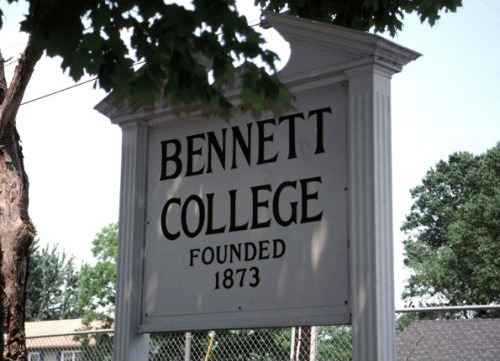 Part of the Omnibus Appropriations Bill signed March 23 by President Donald J. Trump; the legislation gives Bennett a reprieve on as much as $1 million annually for a minimum of three years, up to a maximum of six years, on money the College normally would have paid in interest on their Capital Finance loans.

The recently passed legislation increased the HBCU Capital Finance Program by $10 million, money that was added with authority for the Secretary of Education to grant deferment for qualifying private HBCUs participating in the program. The Capital Finance Program provides financial resources at a lower interest rate for HBCUs to construct new buildings or to renovate existing ones on their campuses.

Dawkins worked closely with Lomax, United Negro College Fund president and CEO, and Murray, vice president of public policy & government affairs for UNCF, to have the deferment language written into the Omnibus Appropriations Bill. She met with them in January to discuss the possibilities, and they connected her with members of Congress.

“Congressman Ted Budd and his staff were instrumental in co-writing the language in the Omnibus Appropriations Bill,” Dawkins said. “I’d also like to publicly thank Congresswoman Adams, a longtime Bennett supporter and former Bennett professor, and Congressman Bobby Scott for their crucial assistance on this.”

In an email to UNCF presidents, Murray cited Dawkins for her role in having the legislation enacted.

“I have to thank Bennett College President (Dr. Phyllis Worthy) Dawkins, whose January 2018 visit to Washington, D.C. brought this issue to UNCF’s attention,” Murray said. “She is joined by Huston-Tillotson President (Dr. Colette Pierce) Burnette, who did Capitol Hill visits on this issue. And we are grateful to Rep. Ted Budd, who represents Bennett College, and Rep. Alma

Adams, co-chair of the bipartisan HBCU Caucus and a Bennett College faculty member for 40 years. Those two members of Congress allowed UNCF to advocate for a “bipartisan solution” to a problem ailing many of our institutions.”

“It was in this meeting that the deferment request was initiated,” Dawkins said. “The money Bennett will save will enable the College to move towards fiscal stability. It took less than three months for Congress to add the language to the Omnibus Appropriations Bill. It literally took ‘an act of Congress’ to include it and to pass it.”