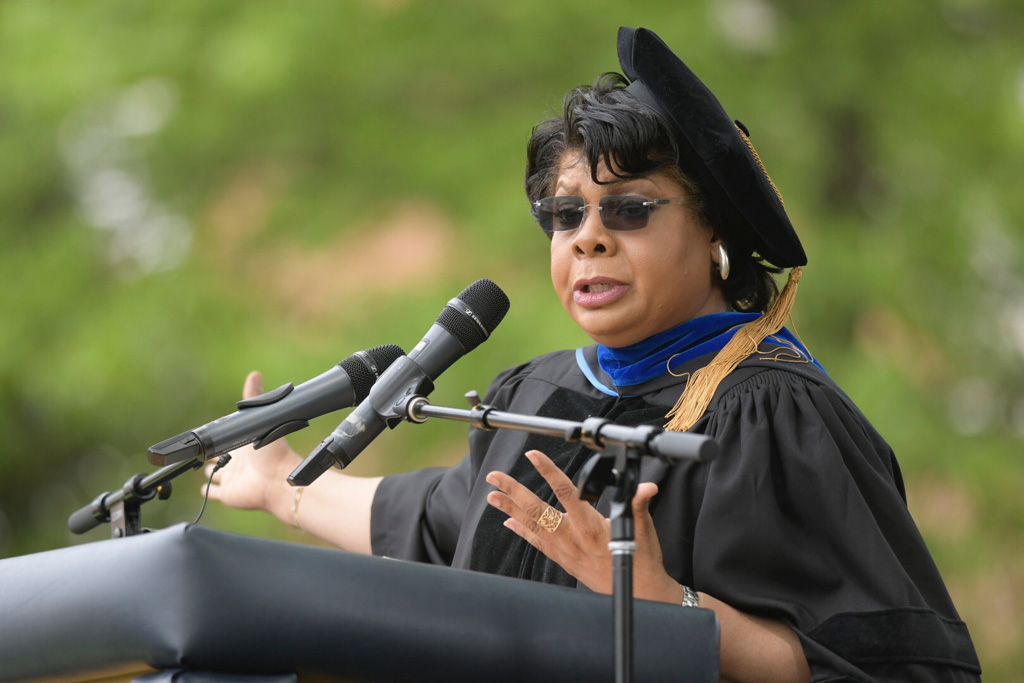 Bennett College’s 78 graduates were encouraged to give back to their alma mater and to embrace their beauty on May 5 in a commencement address by White House Correspondent/CNN Political Analyst April Ryan.

Ryan delivered Bennett’s 2018 Commencement address to about 2,000 people assembled on the Quadrangle. She was introduced by Bennett President Dr. Phyllis Worthy Dawkins, who met her last year in Baltimore at a White Breakfast sponsored by area alumnae.

“Ms. Ryan is a native of Baltimore, Maryland, and a proud graduate of Morgan State University,” Dawkins said. “She gives back to the community by serving as a mentor to aspiring journalists and assisting with developing ‘up and coming’ broadcasters. Although Ms. Ryan is enjoying an illustrious career, she considers her greatest life’s work raising her two daughters, Ryan and Grace, who are phenomenal young women.”

After Ryan’s speech, she was given a gift by Chasity Byrd and TyQuan Hutchinson, children who attend the Martin Dixon Intergenerational Center, which is named after Bennett alumna Dr. Joyce Martin Dixon from the class of 1956.

Several people gave remarks before Ryan spoke, including Linda McGill Boasmond of Chicago, upon whom the College bestowed an Honorary Degree. Boasmond is a chemist who runs the country’s first and only African-American, woman-owned chemical manufacturing plant.

She encouraged the graduates to never give up or lose faith, even when times get hard. She shared with the audience that at one point in her life she worked three jobs in one day and had only $750 in her bank account.

McMichael came to Bennett with a 2.3 GPA but graduated with a near-perfect 3.9 grade point average and has been accepted into graduate school at Columbia University.

She acknowledged numerous Bennett College professors and staff members who helped her along her journey at Bennett.

Robinson, a 1971 Bennett graduate, brought greetings during the ceremony and also presented the Board of Trustees Teaching Excellence Award to Dr. Alan Goble, chair of the Psychology Department and an associate professor of psychology.

Scott gave a tribute to Former First Lady Barbara Bush, who delivered Bennett’s Commencement address in 1989 during Scott’s presidency and was bestowed an Honorary Degree by the College.

Graduates Sandra Toledo and Delphina Charles presented flags from their respective countries, Mexico and the U.S. Virgin Islands. The presentation of the colors was conducted by members of Girl Scout Troop 1726 from St. Matthews United Methodist Church in Greensboro.

Gwendolyn Mackel Rice, a member of the class of 1961, presented the Honor Class from 1968.

Dawkins gave the charge to the 78 graduates just before the singing of the alma mater, followed by the benediction by Reverend Dr. Natalie McLean, a 1980 Bennett graduate and the College chaplain.

“Dear Bennett Belles, please cherish this day, a day that is truly all about you,” Dawkins said. “After all, despite your anxiety when you first entered the College, and the failures and disappointments you have experienced, you have made it! You have become college graduates and accomplished a goal that some only dream of.”

Dawkins invited the graduates to come back to visit their alma mater, particularly during Alumnae Weekend, which coincides with Commencement. And, like Ryan, she encouraged them to give back to Bennett.

“I also ask you to tell other bright young women about the wonderful education you received at Bennett,” Dawkins said. “Tell them about the sisterhood. Tell them about the outstanding faculty and staff. Encourage them to consider enrolling in this awesome institution. Today you join an esteemed legacy of dynamic women. Please honor this legacy in everything you do. Please never forget what it means to be a Bennett Belle. Embrace the love this Institution has bestowed upon you.”

After the ceremony, graduates rushed to find their parents and other loved ones. Endia Lilly said she’s the first person on her mother’s side to graduate from a four-year institution. She earned her bachelor’s degree in psychology and plans to attend graduate school at Pfeiffer University in Misenheimer, North Carolina.

Lilly cried tears of joy after the ceremony as she was surrounded by relatives including her mom, Marion Lilly, sisters Rasheda Nicholson and Nakia Lilly, and her aunt Brenda Lilly Davis, a 1977 Bennett graduate.

Graduate Alicia Denson, who earned her bachelor’s degree in business management and is from San Jose, California, also had several relatives and friends on hand Saturday, including her mother, Carmencita Denson, father, Ernest Kennedy, Jr., her Godfather, David Schroeder and family friend C.J. Dozier, who carried two bouquets of balloons and other gifts for her.

When asked about her post-graduate plans, Denson said, “to get a job and pay off my student loans. Right now I’m so proud and happy I can’t even think.”