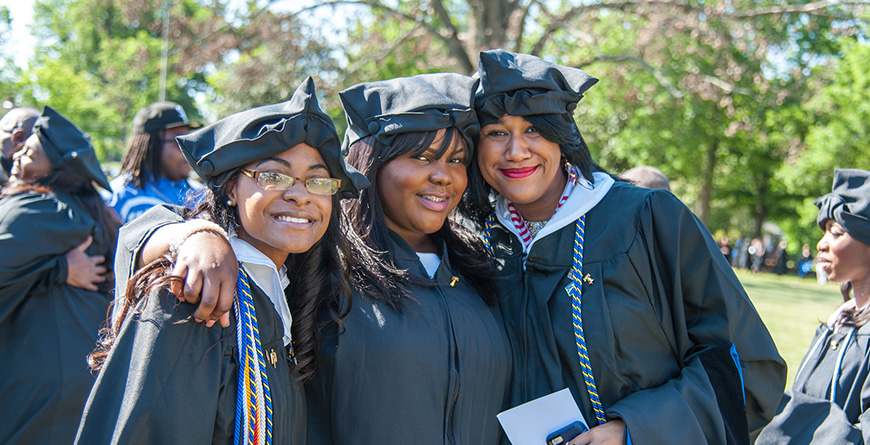 Here’s what Chiara Alston had to say about Bennett College and her new job opportunity: “I knew as early as the seventh grade that I wanted to attend Bennett College and major in business administration. I have a passion for winning and I have always been dedicated to learning. I always knew that I wanted to work for a major corporation. It was April of 2015 when I first encountered The Hershey Company head at the Enactus National Explosion in St. Louis Missouri. Other major corporations were there as well such as Microsoft, Apple, Johnson & Johnson, and many more. I always wanted to work for Hershey. I am a living proof that dreams do come. With faith and prayer anything is possible and I strongly believe that God was with me throughout the entire hiring process. The position that I have is my dream job which is a Retail Sales Territory Manager. I am so excited and proud to say that only at the age of 22 years old I have reached my number one goal of starting my career with “The Hershey Company.” I thank my alma mater Bennett College especially the Business Department at Bennett College, our wonderful President Fuse- Hall, and my amazing Bennett sisters for supporting me along the way.”

Former SGA President to Serve as a Teacher in Rwanda

Shemiah Curry,  president of the Student Government Association for 2015-2016 who is an elementary school teacher, was the first students to receive an honorable mention during the HBCUgrow LEAD Conference First annual awards ceremony.  After graduation she will be a part of a yearlong service program, Young Adults in Mission Program though the Evangelical Lutheran Church of America.  Curry, a 2016 graduate, will be serving in Rwanda as an English Teacher and aid to new teachers. She will be leaving the USA in Aug of 2016. A native of Chicago, Curry is passionate about civic engagement and education for disenfranchised segments of society. Her internship at the White House inspired her to be a change-agent and pursue a Ph.D. in education and sociology with a focus on gentrification, racial inequalities, and school choice. While at Bennett College, Curry has also taken advantage of opportunities to become a global citizen. In 2013, she attended a Global Seminar in Salzburg, Austria where she had the opportunity to engage in thoughtful dialogue centered on cross-cultural assimilation, racism and gender inequality. As a student at Bennett College, she has had multiple research experiences. She participated in the UNCF Andrew Mellon Mays Summer Institute in Atlanta in 2014 and the Southern Sociological Society Conference in New Orleans earlier this year where she presented her research on “It’s Race! It’s Economic Status! It’s Gender Inequality? Perceptions about the Identification and Responses to Gender Inequality in Academic and Co-Curricular Arenas Experienced by African-American College Women.” This year she also served as a research assistant to Dr. Micere Keels at the University of Chicago, becoming proficient in statistical analysis software.

Shyainne Bell to Attend Graduate School and Volunteer in Uganda Shyainne Bell, a 2016 graduate of Bennett College, has been accepted into the Ph.D. in Systems Science at The Binghamton University in Binghamton, New York.  As part of her studies, she will conduct research concerning human computer interaction and child development.

“As I do not expect to change the world, I do aspire to have a vast impact on the lives of our families and children in this age of technology,” Bell said.

On June 12, she will be participating in a mission service with the United Methodist Church, Global Justice Volunteering Program.  Her host city and country is Kampala, Uganda.  She will be volunteering with the organization, Days for Girls.  As a volunteer, she will be ministering to teen girls about the importance of mental and physical wellness.

“Throughout Africa, it is taboo for young girls to talk about their coming into womanhood,” Bell said.

Exercising her entrepreneurial background, she will be assisting Ugandan village women with developing their everyday craft work into a viable business.

Bell majored in computer science at Bennett concentrating in information technology and minoring in entrepreneurial studies.

Kadrien Wilson Featured in “Made in Greensboro” Campaign

Kadrien Wilson was born and raised in Greensboro and attended Bennett Middle College, graduating with enough credit to enter college as a sophomore.  Kadrien is a member of St. Matthews United Methodist Church. Her United Methodist affiliation has allowed her to have the opportunity to serve as a Black College Fund Ambassador. As an ambassador she has traveled to five states to speak at statewide United Methodist Annual Conferences. She has also traveled to Hiroshima, Japan to the International Association of United Methodist Schools, Colleges, and Universities conference where the theme was centered on World Peace. As an honors student, Kadrien had the opportunity to travel to Johannesburg and Cape Town South Africa. During her time there, she engaged in service projects at local daycares, historical tours, and met Winnie Mandela. Kadrien currently serves as the 2015-2016 Vice President of the Student Government Association, a member of the Student North Carolina Association of Educators, Phi Beta Delta International and Alpha Kappa Mu National Honor Societies. She plans to stay here and teach in Guilford County Schools after she gets her teaching license after she graduates from college this weekend.  She was featured in the “Made in Greensboro Campaign.”  See her story at http://www.madeingso.com/2016/05/04/kadrien_wilson/.

Three Bennett Belles were selected for the City of Greensboro Fellows Program — Janae Peats, Jaiza Wesley and LaTaija Peterson.  Peats is from East Palo Alto, CA, and came to North Carolina to attend Bennett College. As a recent May graduate with an English degree, Janae will be the Diversity and Inclusion intern at VF Corporation this summer. Janae’s dream job is to be a social entrepreneur and elected official. In her spare time, Janae enjoys hiking, attending community events, networking, and community service. Wesley is originally from Olympia, Washington, and came to NC to attend Bennett College. As a rising senior at Bennett, Jaiza is studying psychology with a minor in sociology. In the future, Jaiza aspires to work with policy making or as a college professor. In Greensboro, Jaiza appreciates the sense of community and enjoys the downtown area.  Peterson is a May 2016 graduate from Bennett College. LaTaija’s degree is in journalism and media studies, and she will join the Union Square as the Phase II intern this summer. In Greensboro, LaTaija’s favorite things are festivals, various restaurants, and the number of colleges and universities located downtown.

Bennett Helped Me to Discover Me