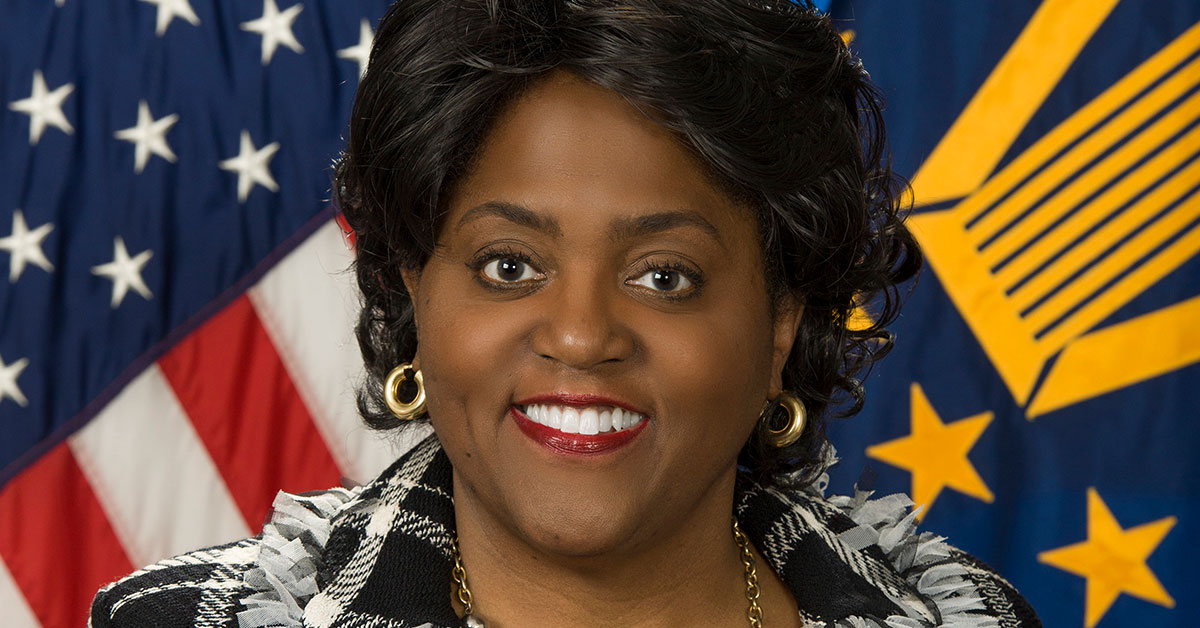 If it weren’t for Bennett, I wouldn’t even be here.

Bennett Belle Jacquelyn Hayes-Byrd ’82 has an impressive career spanning a variety of government agencies and administrations, currently serving as executive director of the U.S. Department of Veterans Affairs Center for Women Veterans in Washington, D.C. Through all she has accomplished, she views her family and Bennett as the foundation of her success.

During her time at Bennett, she took special education courses while actively participating in U.S. Air Force Reserve Officer Training Corps (ROTC). One night early in her college career, at 6:30 p.m. on February 25, she was on her way to North Carolina A&T State University’s ROTC detachment with two friends to visit the library. While crossing the street she, along with one of her friends, was hit by a car. The accident left the entire left side of her body paralyzed.

While the accident derailed her plans, she did not let it stop her: “What happened taught me to ‘close my eyes, jump in and wear comfortable shoes’ because I realized life is a ride and a journey.” During recovery at home in Jacksonville, North Carolina, Bennett allowed her to take community college courses that transferred. The College’s support allowed her to obtain a degree in special education the same year she received her U.S. Air Force commission. “Bennett gave me a piece of herself when I wasn’t physically there, and that helped me through the process. With that support I was encouraged in my belief that I could do anything regardless of my situation. Even now when I do something, I envision it already accomplished—I know it’s going to get done,” she shared.

Hayes-Byrd completed 10 years of active duty and 10 years of inactive duty in the Air Force. While serving, she rose to the rank of major as an education and training officer supporting the needs of thousands of airmen and officers. She also met her husband who was involved in politics and introduced her to the field. Ever since, despite the challenging environment, she has found success in the political realm.

Initially, she worked for New Jersey Governor Christine Todd Whitman, the state’s first female governor. She later joined a planning committee for a political convention in Philadelphia, that she helped to grow from 13 to more than 300 individuals.

After the convention, she contemplated what to do next. She soon got her answer as she received a call from the White House inviting her to Washington, D.C. for an interview: “I almost hung up because I didn’t believe it was real. I’m happy I didn’t because I went in the following Monday for an interview, and the Monday after that I was sitting in my new office in the White House.”

She served as director of administration and operations managing Room One, the White House Management and Operations Office, to ensure the president and his administration had the support necessary to function on a day-to-day basis. “The experience was surreal…I would be walking down the hall and the President of the United States would give me a warm greeting,” she recalled fondly.
She later held positions in other top tiers of the federal government, including the executive director for the Global Diversity Initiative at the Department of Commerce, along with service as the director of administration in the Department of State.

Being well established in government, Hayes-Byrd was asked to help the current administration. She accepted on the condition that she would work for the Department of Veterans Affairs. Her service, her father’s 33 years in the Marine Corps—reaching the highest levels of the enlisted ranks, her uncle’s service as a Montford Point Marine and her sister’s Army service, put veterans’ matters close to her heart. “I knew I wanted to help improve Veterans’ affairs and protect the people who served our country bravely. I especially wanted to find a way to take care of our women Veterans because we were truly the invisible soldiers.”

Since beginning her current role last March, she has traveled the country conversing with women and male veterans regarding women veterans’ health issues and other related concerns. “We as women Veterans often don’t see ourselves as Veterans and don’t discuss our experiences or our needs. In addition, many in communities do not see women as Veterans. Those thoughts and the culture surrounding women Veterans has caused many to go without the benefits and services we have earned and so richly deserve.” Conversations from her travels demonstrated the belief that only men are veterans. She explained that when a woman veteran was asked “are you a veteran?” she was likely to say “no,” so Hayes-Byrd is changing the narrative and dialog by asking “did you serve?” instead.

Throughout her career spanning three presidential administrations, her mission has been to serve and make a difference. “Bennett taught me to make happen whatever is afforded to you, and this might mean taking the path most resistant. We all have a short period of time to be on this earth, and this is what I’m doing to leave it better than I found it. Many of the hills are steep, so I have chosen to close my eyes, jump in and wear comfortable shoes!”

Kathy Allen is a Grandmother, a Californian, an Inspiration… and a Bennett Belle