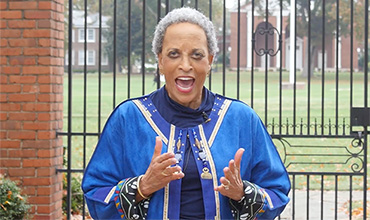 What do Shonda Rhimes, Beyoncé, Maxine Waters and Serena Williams have in common?

The TV show producer, singer, politician and tennis player, respectively, are African-American women who are at the top of their game. And so are Bennett Belles across the globe!

Bennett College is the melting pot of Black Girl magic, where young women arrive as unsure freshwomen but graduate as confident, competent and competitive women ready to make their mark in today’s global society.

Just as Rhimes, Beyoncé, Waters and Serena are sisters who are “doing their thing”, so are current Belles. For example, Alexis Branch is studying abroad in Jerusalem this semester, Azuree Bateman interviewed actor Shemar Moore in New Orleans, Louisiana, in August during the annual NABJ Convention, Kendra Mills, Zanaeh Rogers and Constance Staley presented posters in Phoenix, Arizona, this month during the 2017 Annual Biomedical Research Conference for Minority Students (ABRCMS), and Alezaihvia Melendez gave a presentation in Washington, D.C. this month at the HBCU Faculty Development Network Conference.

Across the world, sisters are making their mark on society. And during Week Two of the Six-Week Crowdfunding Campaign to raise $1.5 Million for the Johnnetta Betsch Cole Scholars, Dr. Cole is calling on sisters from different walks of life to help raise money for Bennett College. Money raised through the Campaign will be used for scholarships for the students residing in the Honors Residence Hall at Bennett that now bears Dr. Cole’s name.

In an effort to help raise the $1.5 Million, Dr. Cole has prepared several videos in which she calls out her sisters. In the first video she’s calling out five sisters in particular: Beverly Guy-Sheftall, a feminist, scholar, writer, editor and college professor, C.C.H. Pounder, an accomplished actress, Debra Lee, Chairwoman and CEO of Black Entertainment Television (BET), Ingrid Saunders Jones, National Chairperson of the National Council of Negro Women, and Susan Taylor, former Essence Magazine editor.

Everyone, please #Add2thePot of the Black Girl Magic permeating Bennett College by going to grow.bennett.edu/drcolescholarship and making your donation to the Johnnetta Betsch Cole Scholars Campaign today! But please don’t stop there. Ask your relatives, friends and co-workers to also pour into Black Girl Magic – and ask them to ask their relatives, friends and co-workers to do the same.

Crowdfunding campaigns work best when everyone gets on board to join in the fun. The whole idea of Crowdfunding, in fact, is to get a lot of donations from a lot of people.

Can I count on you? Are you with me? Dr. Cole has called out her sisters, and now it’s YOUR TURN to call out your sisters, too. I’m talking about the ones you hang with at Homecoming or Alumnae weekend, or the ones on whose shoulders you can cry. Don’t forget about the ones you can always count on for sage advice or a swift kick in the butt when you need it most.

So please #Add2thePot of Black Girl Magic by making a donation and by calling out your sisters. Bennett College’s current and future students are counting on YOU…and so am I!

Twins Shareka and Tameka Brown "Why I'm Grateful for Bennett"