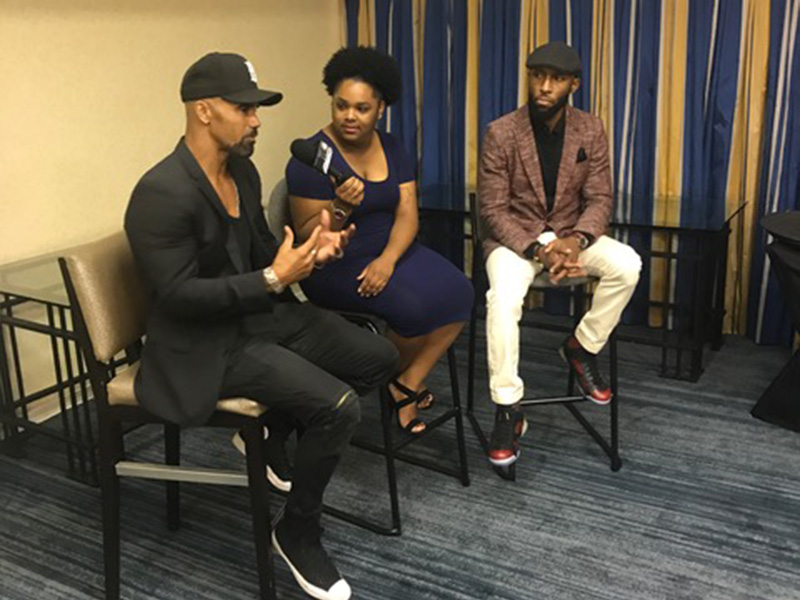 Last week while most college students were still enjoying their summer break, five Bennett Belles were networking with talented journalists from across the country – and they managed to snag interviews with some Hollywood heavyweights to boot.

“It’s important for Bennett to send students to the convention each year because it gives them a chance to see what it takes to become successful in the media field,” Lipscomb said.  “I always encourage our Belles to not only attend the NABJ Convention but also to cover the different workshops and events that are held so they can show prospective employers their skills and potential.  This year two of our students got a chance to interview a famous actor, and another student interviewed an award-winning producer, so it was a very productive and fun trip for them.”

Lipscomb is referring to actor Shemar Moore, famous for his role as agent Derek Morgan on the hit CBS show “Criminal Minds” and a former star on CBS’ daytime soap “The Young and the Restless,” and producer Jon Landau, famous for “The Titanic,” for which he won an Academy Award, and “Avatar.”

After her interview with Moore, Bateman contacted her mother, DaChanta Bateman, a huge “Young and the Restless” fan.

“I told her around 5 o’clock there was a possibility I might get to interview him,” Bateman said. “We didn’t interview him until around 9 o’clock, so when I called her she figured we had already done the interview.”

Turns out Bateman called her mother just seconds after wrapping the interview – which was recorded by Duell – and introduced her to Moore via Facetime.  Needless to say the elder Bateman was quite surprised.

“You got a sweetheart of a daughter,” Moore said. “She puts on a really good interview. She’s prepared, she does her homework. She’s a sweetheart. She’s on her way.”

Also with Moore was Aaron Rahsaan Thomas, executive producer of “S.W.A.T,” a new CBS show starring Moore that dramatizes the division between the police and the African-American community.  Duell got the chance to ask Thomas how his life experiences influenced the show.

Lipscomb wants to bring a sneak preview of “S.W.A.T.” to campus this fall, in advance of its November 2 premier. He also hopes to have a representative from the show available for a Q&A with students.

Bateman and Duell conducted their interview with Moore and Thomas on the final night of the convention. Sanford interviewed Landau during the convention’s opening ceremony and began by asking him how he got involved in filmmaking.

“Well you know I went to school and studied film, so as you’re a student in school you can appreciate that,” Landau said. “So that was really a big part of it. And then it’s about asking yourself what are films supposed to do. Give audiences escape, but an escape that’s about something. It has a theme and that’s what our movies have, and that’s what Disney’s ‘Pandora – The World of Avatar’ has.”

Lipscomb said the trip was great and he hopes to take students to the convention next year in Detroit.

“You don’t want to wait until you’ve graduated from college to begin competing as a professional,” Lipscomb said. “I want our Bennett students to have training that matches or exceeds that of any student in the country. I’m grateful to Dean Keonte Coleman, the College’s Senior Leadership Team and, of course, Dr. Dawkins for providing this wonderful opportunity for our students.”

A message from The President