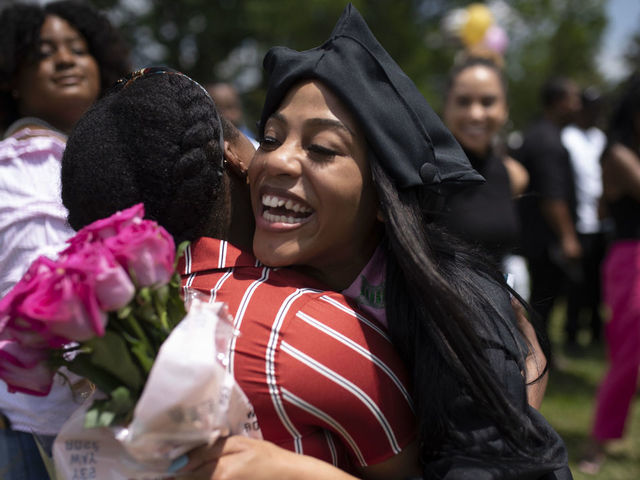 Both hail from Philadelphia’s inner city, where dollars and dreams can be hard to come by and most don’t look too far ahead. They certainly did not expect to be college graduates, given what enrollment costs these days.

But now, they’re among the first students to see a scholarship program from one of basketball’s biggest brands through to completion. Suddenly, both women are completely rethinking their futures.

“When I first realized I got into college, my biggest concern was how am I going to pay for this?” said Murray, who recently completed her studies at Bennett College in Greensboro, N.C., not 50 miles from the alma mater of Michael Jordan, the namesake of Nike’s Jordan Brand shoe and apparel division that underwrites its Wings scholarship program.

During the process, she applied for the Jordan Brand Wings scholarship on a lark after being introduced to the company through its As for Js program, which sees inner-city students rewarded for good grades with credits toward new kicks.

Like Garcia, who attended nearby Kensington High School for the Creative and Performing Arts, Murray sent in the scholarship submission and forgot about it.

Months later, both students realized their dreams had come true.

Recently, Garcia has spent a lot of time pondering those dreams. And she knows what a luxury that is.

Growing up, money was tight in her single-parent household, with her family sometimes subsisting on less than $15,000 a year, she said. She remembers learning to grab extra food at the share table in elementary school, just so her mother and brother might have a little more in their stomachs.

This month, Garcia graduated with a degree in international studies from Millersville University in Pennsylvania. She walked across the stage and tossed her mortarboard high into the air as the joy settled in. Now, she’s in the Yucatan Peninsula on a service leadership trip, with visits to Puerto Rico and the Dominican Republic planned for the summer.

Will she teach? Perhaps she’ll pursue something in her field, or she’ll take advantage of one of her minors – Spanish and government and political affairs. Maybe grad school will be next.

“You can never escape what’s happening at home,” she said through tears.

While doing a marketing internship at Nike headquarters in Oregon last summer – being wined and dined by business luminaries, with important projects at her fingertips – she got a phone call.

“My mom called me – ‘Kiara, there’s no money for food. I’m hungry, can you send me money to eat?'” she recalled. “I remember being at my internship, and there was a point my mom didn’t have money for bills.”

In moments such as those, she sometimes wonders how she got this break.

For Larry Miller, the chairman of the Jordan Brand Advisory Board and a former president of the company, there are no sweeter words.

Jordan Brand began sponsoring full-ride scholarships in 2015, and since then more than 1,600 students have received some type of assistance. On Monday, the company announced 27 new recipients who comprise the class of 2023.

The Jordan Brand Wings Program has awarded over 1650 scholarships since the birth of the program in 2015.

Welcome the class of 2023 to the Wings family. pic.twitter.com/jTX2l2sEi8

Miller had seen the impact the As for Js program was having, but was also engrossed with the kids’ stories. They worked hard in school – some to thrive, and others just to get by – but so many of them had limited hope for the future.

“As a brand, we’ve always looked for ways to give back, but education has been at the forefront because MJ has always pushed that it was important to him,” Miller said of the company’s namesake. “After being in the NBA, he went back to finish his degree (at the University of North Carolina). His mother was a teacher. The brand has taken that on.”

The Wings program has since expanded to seven cities. The newest recipients will receive a full scholarship and support throughout their college careers.

“The goal here is that each one of these kids finishes college, and for us, to just write them a check doesn’t really guarantee that,” said Miller, also a former president of the Portland Trail Blazers from 2007-12.

“It’s about writing a check, yes, but also making sure we’re there to support them, to help them, to monitor them, and making sure they’re having every opportunity to be successful.”

Jordan Brand now has a dedicated team that facilitates and organizes the scholarship program while communicating with participants on a weekly basis. Many of the Wings scholars end up interning at Jordan Brand or Nike, including Garcia.

“We want to have these kids feel like they are part of the Jordan family,” Miller said. “Hopefully some of them end up working for us and with us. For us, this is about helping to change these young people’s lives, and we know education is the key, but also supporting them through their education. Hopefully one will be sitting in my seat one day.”

Murray made the most of her four years at Bennett, graduating with a political science degree and a minor in global studies. She was a member of her school’s quiz bowl team, participated in the model United Nations program, and was the junior class president. She’s already spent time studying in China and London.

Her next step will be teaching students in Thailand as part of the Council On International Educational Exchange program, as she tries to pay it forward.

“This is my main motivation,” Murray said. “The mentors I’ve had, from the Jordan Brand, from my teachers, the community – everyone showing me that I matter, that I can do things. That inspires me to want to do the same for others.”

Getting here wasn’t easy. There were doubts and struggles along the way. But now, both Murray and Garcia see a bright future they didn’t expect in high school.

“A lot of us don’t get to dream, we just get to survive,” Garcia said. “I’m constantly thinking, ‘What is a dream? What is my bigger purpose?’ I ask myself that now. Back then, I didn’t have a dream, just a goal to get out. Now my dreams are real.”