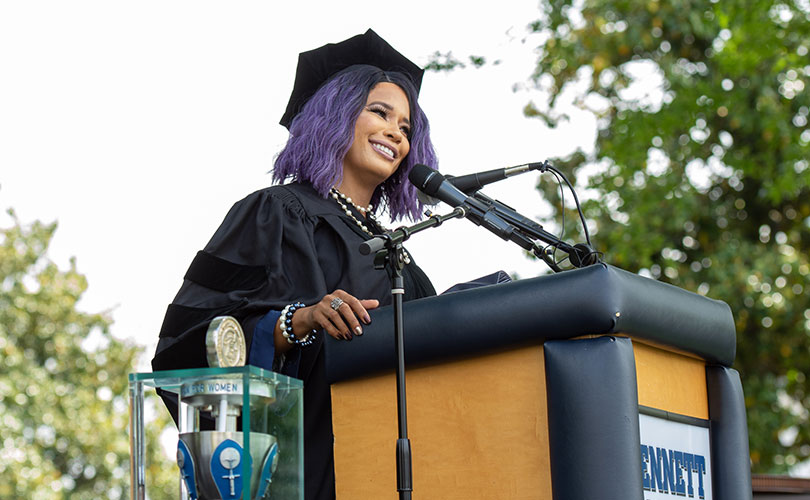 Fifty-one Belles became Bennett College graduates on May 4 when the College held Commencement Exercises under sunny skies and warm temperatures.

Meteorologists had predicted rain; however, the weather was as beautiful as the ceremony, which was held on the Quadrangle in front of about 1,500 people and featured Dr. Kwanza Jones as the keynote speaker, music by the Bennett College Choir and an inspiring speech by Valedictorian Tyler Binion.

Binion, who graduated with a perfect 4.0 GPA and was also the senior class president, talked about growing up poor outside of Nashville, Tennessee. She also discussed the support she received from professors, staff and her Bennett sisters during her four years on campus.

A business administration major, Binion is headed to Duke University in the fall, where she will obtain a master’s degree.

Jones, who electrified the audience on Feb. 4 inside the Annie Merner Pfeiffer Chapel by announcing that she and her husband, Jose´ E. Feliciano, were donating $1 million to the StandWithBennett Campaign, did not disappoint during Commencement.

She talked about the resiliency of Historically Black Colleges and Universities like Bennett, saying there are many people who don’t want them to succeed. Then she reminded the audience that Bennett is still fully accredited by the Southern Association of Colleges and Schools Commission on Colleges, saying high school girls who are considering Bennett as their “Plan B” should make it their “Plan A.”

Jones, an entrepreneur, philanthropist, lawyer, singer and motivational speaker, is the daughter of Bennett alumna Dorothy Wilkerson Jones ’65 and the niece of alumna Brenda Wilkerson Hoover ’63. She and her husband donated the $1 million to Bennett after her mother asked her to donate $1,926 to commemorate the year Bennett became an institution for women only. During her address, she had the members of the Class of 2019 stand and face the audience to say thank you. In turn, she had the graduates’ family members and friends congratulate them, and she encouraged everyone to give thanks to the Creator.

After her address, Jones was given an original painting by children from the Martin Dixon Intergenerational Center, named after alumna Dr. Joyce Martin Dixon ‘56. Jones was also bestowed an Honorary Doctor of Humane Letters by Bennett College President Dr. Phyllis Worthy Dawkins and Board of Trustees Chair Dr. Gladys A. Robinson ’71, a North Carolina state senator.

Before concluding her address, Jones announced that she was giving custom-made, navy blue, “Queen Moves Only” pocketbooks and $500 gift cards to the members of the Class of 2019. She encouraged the girls to use the money as in investment in themselves or in someone else. One student told Jones as she walked across the stage to receive her degree that she would use her money to publish a book she planned to write.

Constance Staley of Ramseur said she plans to use the $500 from Jones to further her education and is applying to be a research assistant in the field of cancer at the University of North Carolina at Chapel Hill.

She said Commencement was everything she’d hoped it would be.

“The day was really great,” said Staley, SGA Vice President. “While we were all ready to graduate and were excited, the energy in the gym before we walked through the Bearden Gates was really high. We were glad to be finished and were glad to have reached that milestone in our lives.”