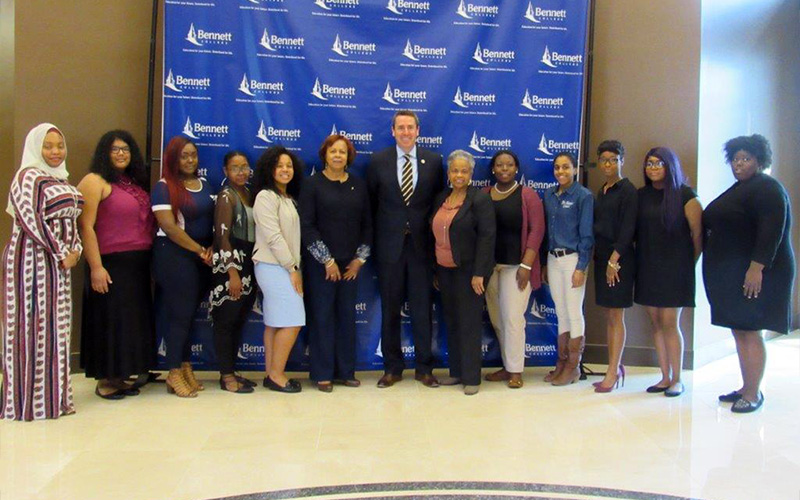 The meeting was organized by Robinson, a 1971 Bennett graduate, chairwoman of the institution’s Board of Trustees and the deputy minority leader in the N.C. Legislature.

“For me it’s personal,” Walker said during the Friday afternoon meeting in Bennett’s Global Learning Center. “I married my wife over 24 years ago. She is a Nurse Practitioner, works in surgical services and is part of the Air Care team at Wake Forest Baptist Medical Center.”

Walker’s wife is a graduate of Winston-Salem State University, from which she earned her bachelor’s and master’s degrees.

“A lot of people are unaware of HBCUs and their impact on our country,” Walker said, while heralding WSSU’s nursing program, North Carolina A&T State University’s engineering program and Bennett.

Robinson said Bennett’s role is more critical now than ever before as the institution prepares African-American women for careers in Science, Technology, Engineering and Math (STEM) and business – fields in which African-American women are underrepresented. Bennett is one of only two all-women HBCUs in the country.

Six of the students who met with Walker on Friday are math majors, two are biology majors, one is a business major and one is an interdisciplinary studies major. Walker told them that Robinson worked hard to arrange his visit to Bennett and that Americans must find a way to work together despite political differences. “When you look at the political landscape and you see the toxicity, the rhetoric, how does that impact you?” he asked.

Bennett College SGA President Yahnick Barclay, a senior biology major from Bermuda who aspires to become a general practitioner, said the country is in a divisive state and that people seem to be for you or against you with no middle ground.

Carmen Acosta, a fresh woman math major from the Dominican Republic, said partisan politics have taken over the country.

“I think the issue right now is how partisan everything has become,” Acosta said. “I also think we tend to make our opinions too much a part of our identity, which makes it difficult to sit down and talk.”

Walker commended Acosta for her insight and said that building relationships and having open, honest dialogue are key if the United States is to heal and grow.

“There are tough issues,” he said. “We have different world views and different ways to resolve things.”

Walker has spearheaded tomorrow’s meeting at the Library of Congress between Trump administration officials and HBCU leaders.  Dawkins will attend.

Dr. Dawkins, other HBCU leaders meet with members of Congress