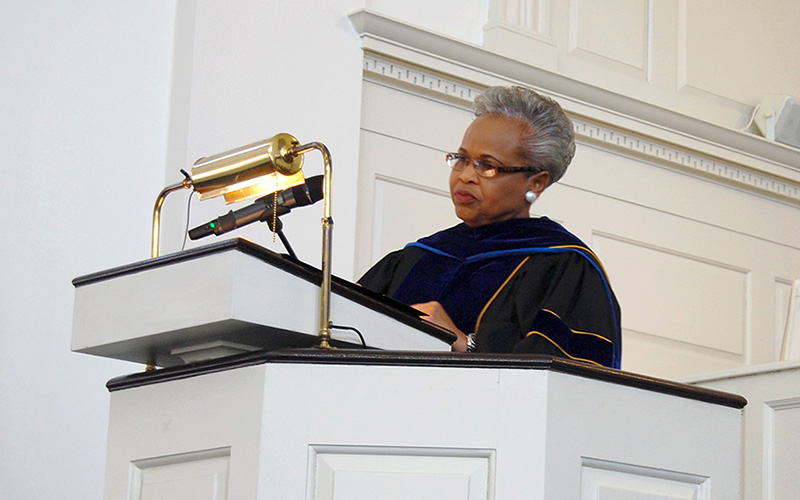 During a speech in which she invoked prominent women including Shirley Chisholm, Eleanor Roosevelt, Michelle Obama and Virginia Woolf, Sen. Gladys A. Robinson on Thursday encouraged Bennett College students to embrace the power of womanhood and to constantly reach higher.

Robinson, a 1971 graduate of Bennett College, delivered the keynote address at the institution’s Honors Day Convocation, which began at 11 a.m. inside the Annie Merner Pfeiffer Chapel.

“I congratulate you, Bennett sisters,” Robinson began. “You who have gone the extra mile, stayed up a little later or studied a bit harder and maybe skipped a few parties to push the scales of excellence a little higher. We are here to congratulate you.”

In her 20-minute address, Robinson told the young women being honored for their high academic achievement that they must be determined to go higher.

“I am reminded almost weekly that the more things change the more they stay the same,” said Robinson, deputy minority leader in the Senate and Chairwoman of the Bennett College Board of Trustees. “Up from slavery, we came in the 1600s when Negro women were possessions of their white masters. And now, we deal with a society where any negative language about women and their bodies is acceptable. But as we were told by former First Lady Michelle Obama, you deserve to be treated with dignity and respect, and you must disregard anyone who demeans or devalues you. It’s not what they call you. It’s what you answer to that defines you.”

Robinson is the fifth of seven children and grew up in Columbus, Georgia. She said her mother was a domestic worker who cleaned white people’s houses and had an eighth grade education, while her father had a second grade education and worked for the city.

“My heart froze and my anger rose every time I saw my daddy take his hat off when his white bosses came around, or when young white girls my age called my mother by her first name, Sarah,” Robinson said.

Robinson was accepted at Emory College in Atlanta but chose instead to attend Bennett, a decision she said she’s never regretted.

During her four years at Bennett, Robinson was Junior Class president and was among a group of students who slept on the president’s lawn to try to change curfew and other traditions. But make no mistake about it, her speech wasn’t about her illustrious career but instead was filled with encouraging words for the young women assembled inside the chapel.

“You cannot make progress by standing on the sidelines whimpering and complaining,” Robinson said. “You make progress by creating and implementing ideas. You must announce, ‘here I am, world. I am not just somebody. I am an African-American woman, phenomenal, inspired. I am going higher, and I am taking others with me.”

After reciting several challenges African-American women face in the workforce, including being accepted though they may wear their hair natural and being stereotyped as angry black women, Robinson reminded them that Roosevelt once said no one can make you feel inferior without your consent.

“You’re certain to face many challenges, but see them as opportunities to go higher,” Robinson said. “And as Virginia Woolf said, ‘if you have to speak louder to get your voice heard, then do it.’ Harriet Tubman certainly spoke loud and resonant when she said, ‘Ain’t I a woman, but I can do just as much work as a man.’ Young women, when you wake up in the morning, before you step your feet onto the floor, say to yourself ‘today I am going higher.’ ”

Robinson was introduced by Bennett College Interim President Dr. Phyllis Worthy Dawkins, who gave a charge to the students after they were recognized for their academic achievements.

“The greatness that is Bennett has been displayed by today’s honorees,” Dawkins said. “Young ladies, you have done exceptionally well, and you should be proud of yourselves. As I think of your outstanding academic success, I am reminded of Revelation 2:2 which says, ‘I know your deeds, your hard work and your perseverance.’ It’s often said that character is what you do when nobody’s watching. Well, ladies, clearly you did the right thing when no one was watching, and today we congratulate and celebrate you for that.”