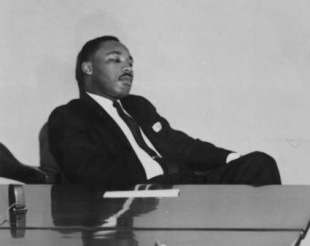 Bennett College will host a special event on February 11 to commemorate the 60th anniversary of Dr. Martin Luther King, Jr.’s speech on campus.

The MLK Commemoration is being held on Sunday from 3 p.m. to 5 p.m. inside the Wilbur Steele Hall Art Gallery and is being held in conjunction with Conscience of the Human Spirit: Quilts Honoring the Life of Nelson Mandela, which is currently on display inside the gallery. Mandela was released from prison on Feb.11, 1990, after serving 27 years for his opposition to Apartheid.

During Sunday’s celebration, King’s speech – which was delivered inside the Annie Merner Pfeiffer Chapel on Bennett’s campus in February 1958 – will be played. Women who were Bennett students at the time, community members who attended King’s speech and people who were active in the Civil Rights Movement are expected to attend. The commemoration will also feature a perspective on Freedom Day in South Africa, which celebrates the day Mandela was released, and an overview of the quilt exhibit.

“Dr. Martin Luther King, Jr. is inarguably the most famous civil rights leader of our nation, and we’re honored to hold an event commemorating the 60th anniversary of his speech that was delivered inside our chapel,” Dawkins said. “Dr. King paid the ultimate price to ensure African-Americans can enjoy the same freedoms and rights as other Americans, and it was very insightful of President Dr. Willa B. Player to bring him to Bennett at that time. “Nelson Mandela endured nearly three decades of imprisonment because he dared to speak out against a racist, oppressive system that treated black South Africans like second-class citizens,” Dawkins continued. “I am proud of Bennett for holding a joint event to celebrate both humanitarians, and I truly hope members of the public will come out on Sunday to participate in this highly worthwhile event.”

McLean is a 1980 Bennett graduate who received her Master of Divinity from Duke Divinity School in Durham, North Carolina, and her Doctor of Ministry from Hood Theological Seminary in Salisbury, North Carolina. Coleman received her Bachelor of Science in Economics from Benedict College in Columbia, South Carolina, and her Master of Public Health from the University of Michigan in Ann Arbor, Michigan. Baker-Whitaker received her Bachelor of Arts in Physics from N.C. A&T State University and her Master of Library Science from UNC-Greensboro. She’s working on her Ph.D. in Communications, Rhetoric and Digital Media at N.C. State University.

The women said they couldn’t let the 60th anniversary of King’s speech at Bennett College – significant, in part, because many of the phrases for which he would later become known were spoken during the address – go unrecognized. Likewise, they said it was perfect to tie the King commemoration in with Conscience of the Human Spirit: Quilts Honoring the Life of Nelson Mandela, which will be on display at Bennett until Feb. 24.

“We are excited to pause in celebration as we remember a significant moment in the life of our community and in the story of Bennett College,” said McLean. “Hosting Dr. King was a sacred trust; therefore, we are obligated to offer subsequent generations the opportunity to hear the voice of the Civil Rights Movement, reflect on the sacrifices of our elders and listen for the charge that’s given in Luke 10:37, to ‘Go and do likewise’.”

Parking for the MLK Commemoration is available in a lot behind the Annie Merner Pfeiffer Chapel and also in the College’s maintenance parking off of East Washington Street.

The event is free and open to the public.

Bennett College Provost Dr. Dorothy Browne joins other HBCU leaders for frank discussion; Taping will air on Feb. 19 before premiere of “Tell Them We Are Rising”