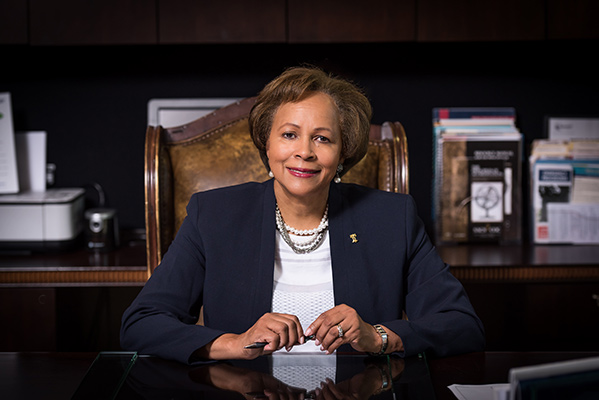 Tomorrow’s meeting will be held at the Library of Congress and was spearheaded by U.S. Rep. Mark Walker (R-N.C.), who met with Dawkins, state Sen. Gladys A. Robinson and 10 Bennett College students in the Global Learning Center on Feb. 24.

Today, Dawkins and leaders of other UNCF member institutions will attend a White House “Listening Session” at 4:45 p.m. with senior Trump administration officials in the Eisenhower Executive Office Building.

Tomorrow’s daylong meeting between HBCU leaders and Trump administration officials will feature discussions on several topics, including ways HBCUs can conduct business with the federal government and private corporations, the importance of Republicans engaging with HBCUs, which are an integral part of America’s higher education landscape, and how to grow the relationship between HBCU leaders and Republican member of Congress.

Also tomorrow, Dawkins and other HBCU leaders will tour the National Museum of African American History and Culture.

“This is a very critical time for historically black colleges and universities as we meet with members of the Trump administration and House Speaker Paul Ryan to discuss important issues affecting HBCUs like infrastructure support, Pell Grant increases to create a pipeline of college-ready students, Title III funding and other support structures to strengthen HBCUs for the future,” Dawkins said. “I think it’s encouraging that the Trump administration reached out to HBCU leaders so early in his presidency, and I hope this represents the beginning of a series of dialogues that will net positive results for Bennett College and other HBCUs.”