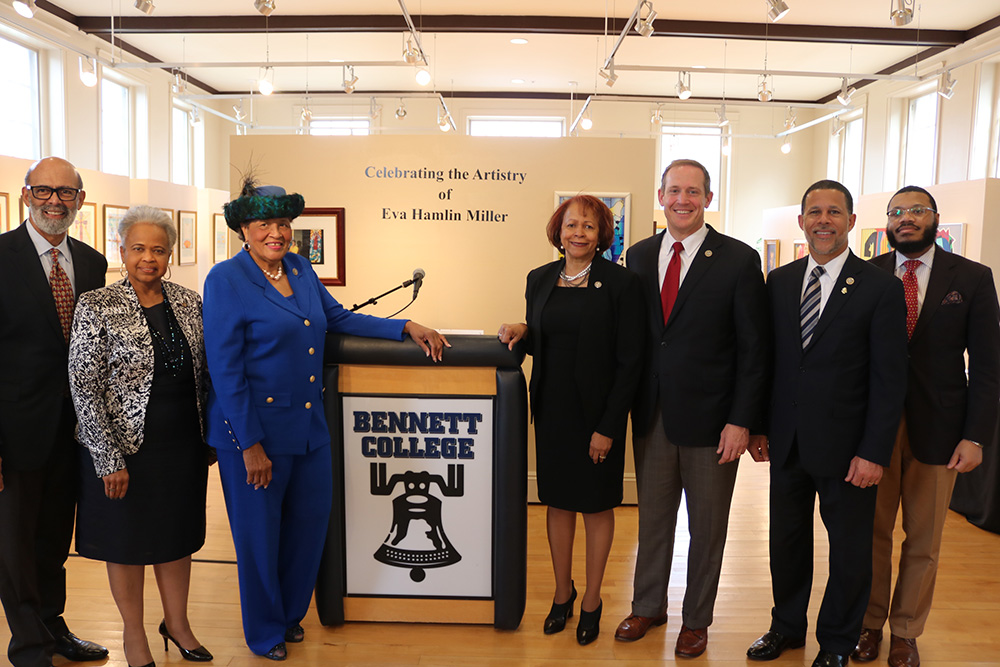 In an act of Congress, literally, Bennett College has been given a deferment on loan payments to the HBCU Capital Finance Program. The reprieve could allow the College to reallocate as much as $1 million annually for the next three years to help strengthen enrollment – a break that could extended to six years.

The Capital Finance Program provides financial resources at a lower interest rate for Historically Black Colleges and Universities to construct new buildings or to renovate existing ones.

When Budd stepped to the podium, he joked about receiving text messages from Dawkins at various hours.

“I hear about these text messages and the persistence of the president and I have to agree,” Budd said. Then after someone from the audience shouted praise The Lord over the bill’s passage, Budd added, “If a law’s going to be passed in two months, that’s where you can give credit – to our Lord.”

Budd used an aviation analogy to describe how the deferment could help Bennett. “From a pilot’s perspective you need some runway to get off the ground to soar, and this is your runway.”

The legislation increased the HBCU Capital Finance Program by $10 million, money that was added with authority for the Secretary of Education to grant deferment for qualifying private HBCUs.

“Congressman Ted Budd and his staff were instrumental in co-writing the language in the Omnibus Appropriations Bill,” Dawkins said. “I’d also like to publicly thank Congresswoman Adams, a longtime Bennett supporter and former Bennett professor, and Congressman Bobby Scott for their crucial assistance on this.”

At the reception inside Bennett’s Wilbur Steele Hall Art Gallery, Lomax praised Dawkins for her efforts.

“I’m delighted to be here and to celebrate the good news,” said Lomax, president and CEO of the United Negro College Fund. “For the issue that we’re here to celebrate, it was really the courage and commitment that drove a bipartisan solution to a problem that was existential…”

Lomax said the country’s economic depression and cuts to the federal Parent PLUS Loan program forced Bennett to seek systemic solutions to get back on track.

“Yes, UNCF played a role and Congress played a role, but none of this happens without a messenger saying ‘yes there’s a problem but there’s also a solution,’ ” Lomax said. “And I want you to know that messenger was Dr. Phyllis Worthy Dawkins. We’re closer than we’ve ever been to solving the problem of Capital indebtedness. I just say to the Bennett community, you’ve got an extraordinary leader.”

Murray, a former lobbyist who now serves as UNCF’s vice president of public policy & government affairs, called the speed at which the bill was passed a miracle. Dawkins credits Murray with being the orchestrator who coordinated everyone’s involvement to bring the passage to fruition.

Adams, who taught art history at Bennett for 40 years and works diligently to ensure HBCUs survive and thrive, said the Institution is special to her, the nation and the world. “This is a day of celebrating. There’s nothing but joy in my heart.”

Robinson, a 1971 Bennett graduate, cited Nelson Mandela’s quote about education being the most powerful weapon people can use to change the world.

Barbara Bush: That time we spent Mother's Day with the first lady