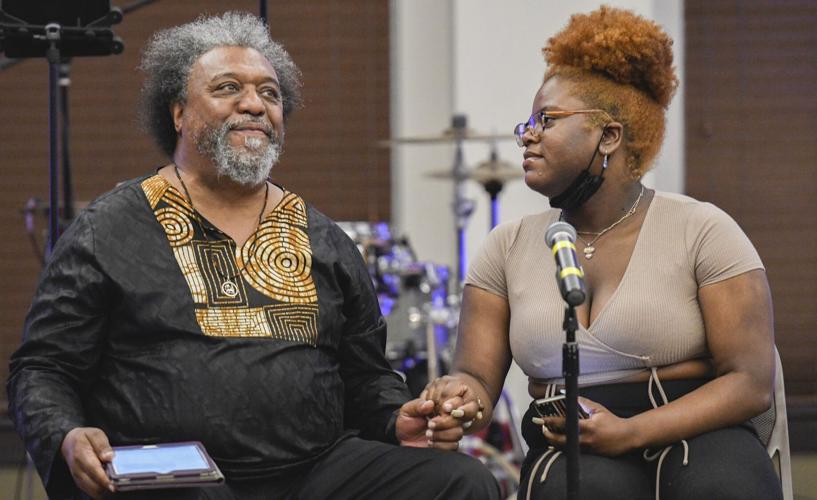 Local colleges and universities on Wednesday introduced their inaugural Amplify Black Voices Festival, which will present four plays during April. The annual festival, created by the new Greater Greensboro Theater Consortium, opened at Bennett College with a sample of performances coming next month.

The four plays will concentrate on Black stories and experiences in America. Each will take place on a different local stage, and feature cast and crew from the various universities and professionals from surrounding communities.

Tennille Foust of Bennett College emceed Wednesday night’s event dressed as Miss Mary, her character in her touring production of “Miss Mary and the Boys.”

“I haven’t known for all of these seven schools to come together for one particular project — not to mention all of the humanities programs coming together to present and showcase theater, centered around one theme,” said Foust, who co-chairs the theater consortium with Anne Hayes. “So hopefully,” Foust said, “this is something we will do for years to come, every year to have a different theme. It just so happens that this year, it’s centered around Black issues and Black Lives Matter.”

Bennett received a $20,000 grant from the National Endowment for the Arts to benefit a theater festival that highlights the Black experience. Theater faculty members from Bennett teamed up with theater departments from six other local colleges and universities. They created the Greater Greensboro Theater Consortium, to educate and promote racial equity and awareness through theater.

Each play will have a ticket price for the general public, typically $15. Student rates are less or free.

Ticket information soon will be coming to gsotheaterconsortium.com.

Plays, dates and locations are: “Mend a City: The Movement,” April 8-10 at Bennett College’s Little Theatre. Written by Vanecia Boone, Tabia Mawusi and Philip J. Lightfoot and directed by Boone.

“Nick and the Prizefighter,” April 22-24, Triad Stage, 232 S. Elm St. Presented by UNCG, the play was written by Kamilah Bush and directed by Natalie Sowell. Triad Stage has rented out its downtown stage to other groups after the COVID-19 pandemic closed it and its founding artistic director left. But it is planning a comeback.

This story was originally published by the Greensboro News & Record on March 24, 2022.

Address From President Walsh: What Does Liberation Mean To Bennett College?