Home News What will a virtual college commencement look like? Here’s what Bennett College is planning to do. 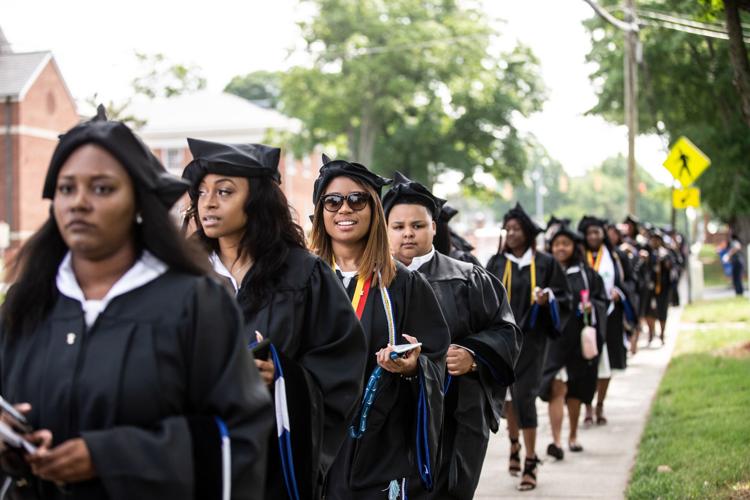 GREENSBORO — What exactly does an online commencement ceremony look like? Bennett College has an idea.

Bennett President Suzanne Walsh said in an interview Wednesday that the college’s upcoming virtual commencement will be partly live, partly pre-recorded and have some of the trappings of a traditional on-campus graduation.

Most U.S. colleges and universities — Bennett among them — moved classes online in March and closed their campuses as COVID-19 started to spread widely. Commencement ceremonies scheduled for May were a casualty of the coronavirus. Some schools postponed in-person commencement until late summer or fall. Some schools will hold commencement online on the previously scheduled graduation date. A few will do both.

Bennett, a private woman’s college, initially said it would cancel on-campus graduation but would hold an online commencement at an undetermined future date. But seniors and their families urged the college to confer degrees closer to the original commencement date of May 2. Because the college extended its semester by a week, it will hold its virtual graduation ceremony at 11 a.m. May 9.

Many Bennett graduates will be the first in their families to get a college degree, Walsh said, and they and their families want public recognition of that accomplishment.

“The ceremony is almost more important than the piece of paper …” Walsh said. “They’ve worked so hard … and having that moment when they get to be celebrated is very important.”

Bennett’s virtual commencement will have some of the same elements as in-person graduation, which is traditionally held on a Saturday morning in May on the main campus quad.

Walsh will wear her cap and gown, and she’ll address the graduates live, probably from the TV studio in Bennett’s journalism and media studies building. There will be a keynote speaker, also live, who will be announced soon. The names of all graduates will be read aloud. And Walsh will formally confer the degrees on the new Bennett graduates. The actual degrees will be mailed home.

But there will be some non-traditional touches as well. The ceremony probably will include some pre-recorded footage from students and their families. And with the help of some Bennett alumnae who work in broadcasting, the college hopes to get live video from the homes of some of its graduating seniors.

Walsh said the 2020 graduating class will be roughly the same size as it was a year ago, when Bennett awarded 43 bachelor’s degrees. This year’s online version of commencement will run for at least an hour. Walsh said she hopes the online event will capture the energy of on-campus graduation and the intimacy of Bennett’s small-college experience.

She’s encouraged by the reception to the college’s Recognition Day, which was held online last Thursday. At its peak, 236 people — the vast majority of Bennett’s student body — tuned in to Zoom to hear the college announce this year’s winners of the annual academic and extracurricular awards. Since then, 1,300 people have seen the video of the awards ceremony on YouTube.

“That’s big for a tiny place like us,” Walsh said.

The neverending stream of online comments during the ceremony told Walsh that students are missing their Bennett classmates, professors and staff members. Though Bennett still plans an in-person commencement sometime later — Walsh said the college hasn’t picked a date — next month’s online ceremony will give students one last chance to come together before the end of the academic year.

“We’re excited to see how we can engage our students and families when we do commencement,” Walsh said.

This news story was originally posted by the Greensboro News & Record.